I am in love with Luang Prabang.  It is an extremely tight-knit–yet welcoming community.  The pace of life is steady but relaxed, and most of what is consumed is local.

Listed as a UNESCO World Heritage site, it is a small city so you can walk the whole thing, but it’s large enough to get your steps in! It’s a swath of land nestled between 2 rivers, the Mekong and the Namkhat.  The rivers are nestled among mountains so you feel like your in a remote protective haven…and you are. 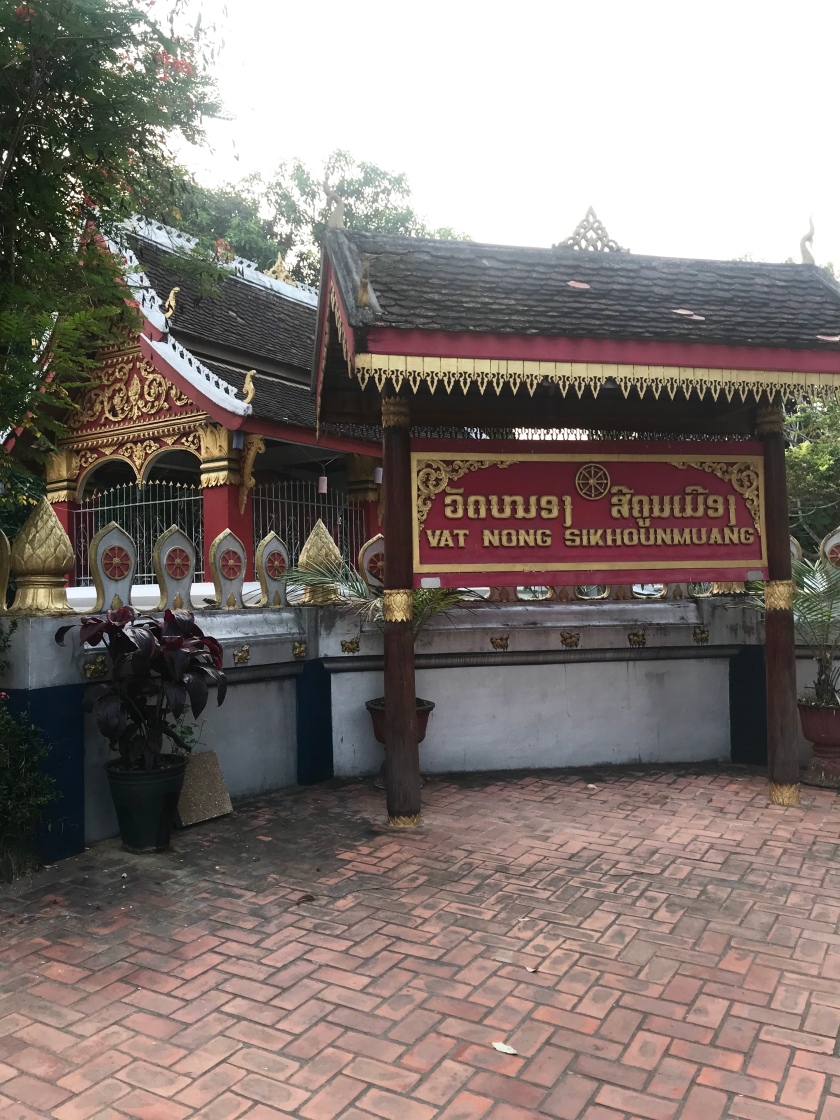 It is the spiritual center of the country and home to numerous Buddhist temples, known here as vats (pronounced “wots”, as in the well-known Angkor Wot in Cambodia).  These temples are schools for young boys training to be monks.  Some will spend a life as a monk, others will get an education and exit a novice. 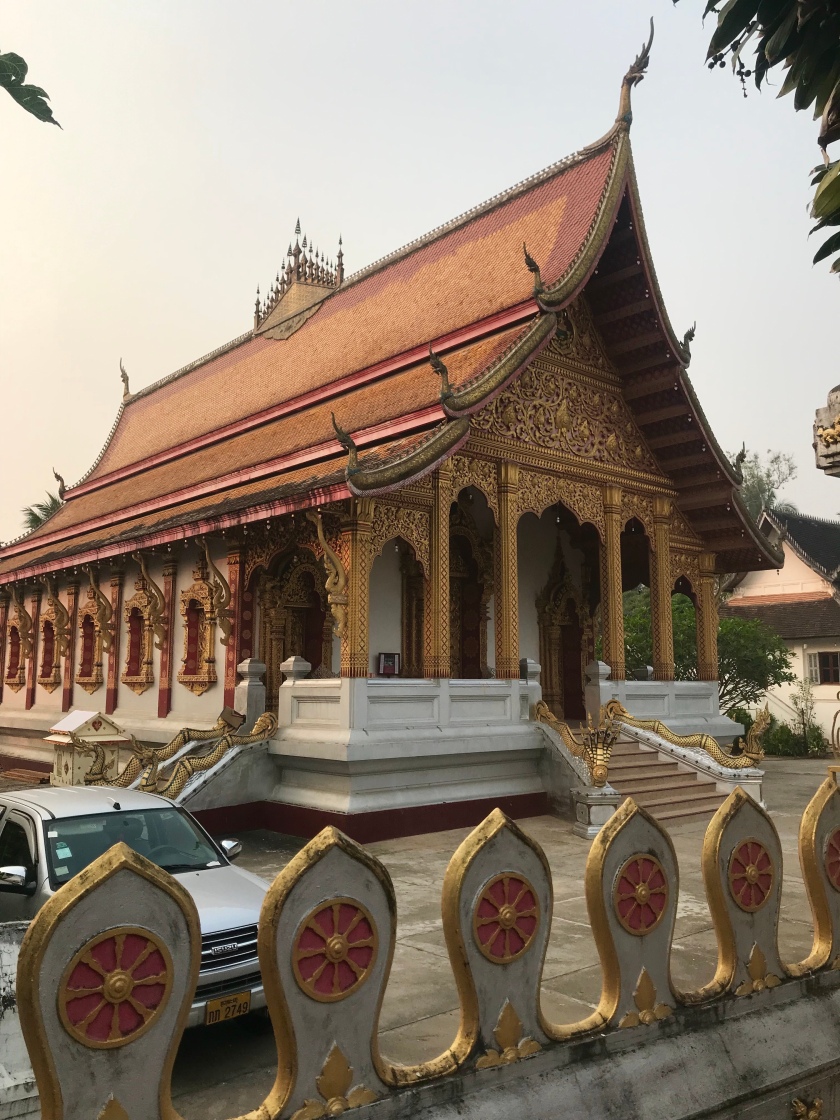 One of the absolute highlights of this city, and this trip, is the morning ritual of giving alms to the monks.  It begins before sunup, and locals take up a spot on the street where they kneel or sit in a tiny chair with their offering, usually a basket of sticky rice.

The drums from each Vat begin to beat at 5:45, in a sort of reveille.  by 6:00 the monks process down the main street with a large bowl collecting an offering from those lined up. The givers sit below the monks in a gesture of respect and put a handful of rice in each bowl.

Here, there is a dichotomy.  The scene is so solemnly beautiful, that it has garnered a lot of international attention and has become quite a tourist attraction.  The tourists bring in a lot of money and want to participate.  I can’t blame them, I’m in that category myself; but, I stood respectfully to the side, observing from a distance.  Michael and I saw busloads of tourists whose touring company arrived early and set up chairs in advance for them.  People had their coffee, set up tripods and video cameras, and generally made more noise than they should.

And while they bring a lot of money, it is not this group that will sustain the young monks.  It is the local men and women who popped out of their homes right at 5:59 to greet the first wave of monks. 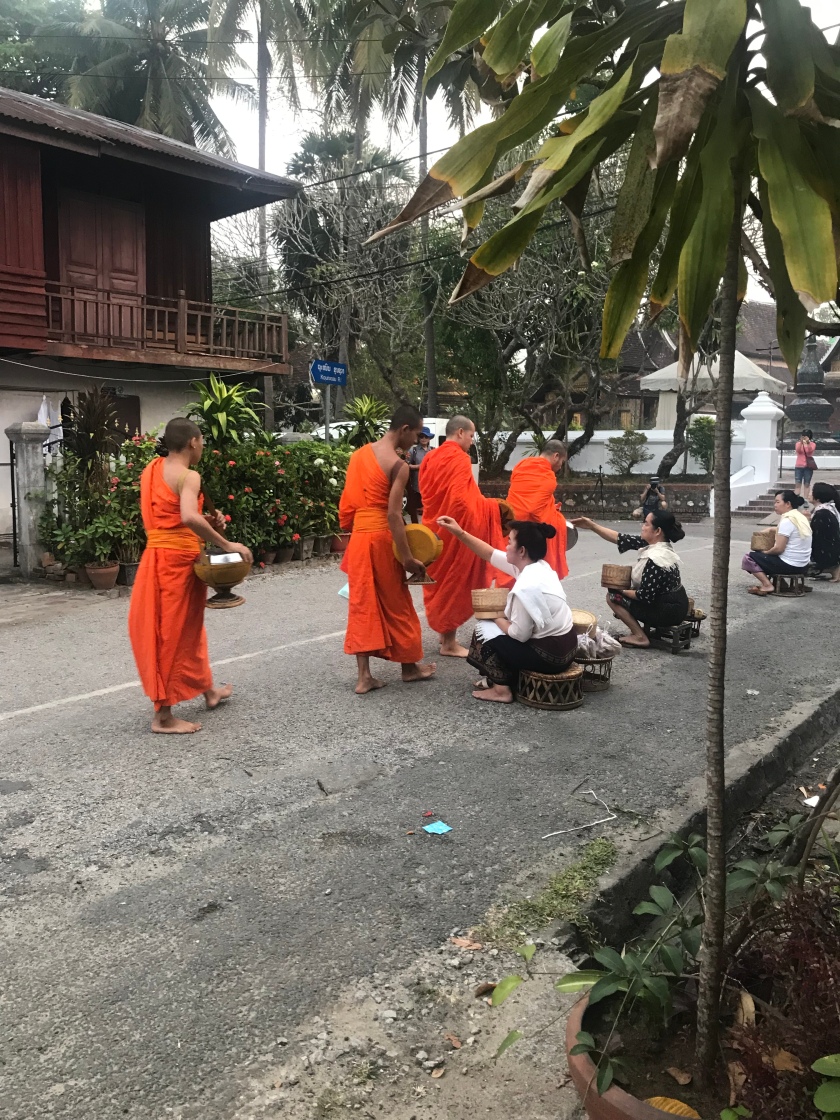 In fact, it was the “givers” who impressed me the most! For these monks, this is the only meal they will eat all day.  These people cook sticky rice every day and get up early in the morning to be there for them.  We were very fortunate that our hotel host clued us in to a quiet side street that got us away from the large groups of tourists and onto a street of locals.  All you could hear was the footfall of the barefoot monks and the occasional rooster.

It was still somewhat dark when the first wave arrived and it grew steadily brighter with each group.

Each wave is another vat and it lasted a little over 30 minutes.  When the last one passed, the locals pulled up their chairs, swept their area of the street and began their day.  I asked one woman how she knew that this was the last one and she laughed at such an outsider question.  In broken English she explained that the schools went in the same order every day and they knew each one.

After the final vat passed, Michael and I toured a nearby one.  It was one of the largest and had a large campus with dorms for the students, various chapels, each with a different form of Buddha.  There would be the sleeping Buddha, representing the past, the standing Buddha for the present, and the happy Buddha focused on the future. As the sun came up, the day already showed great promise!

I can’t deny that to see this ancient communal ritual carried out as we tourists filmed with our iPhones was a little uncomfortable.  That said, the locals didn’t seem all that uncomfortable!  I found the whole experience deeply moving. This city is a beautiful spiritual place and there will be lots more to report from here.