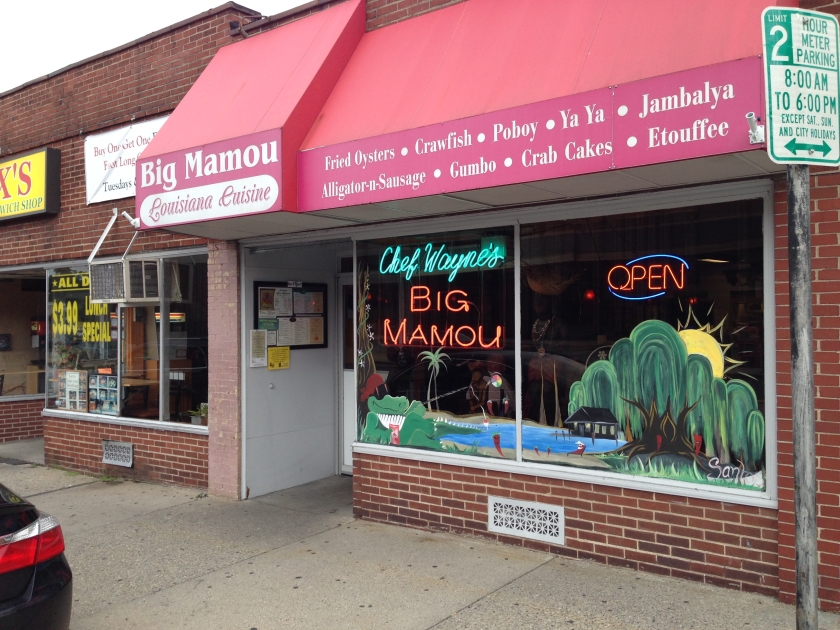 Last year my cousin Brendan and I hiked the Connecticut portion of the Appalachian Trail.  Brendan lives in Springfield, MA and each day as we hiked, he would tell me about the meal we would have when we finished.  He was going to take me to one of his favorite restaurants, Big Mamou and each day he told me about menu items that we would have to order.

It was like a mythical pot of gold at the end of the rainbow; but, it was no myth.  We made it last year to Big Mamou and it was AMAZING!  I regret that I never wrote a blog post about it.

Last week I returned with my family to Springfield for Brendan’s wedding, and the first evening we found ourselves free for dinner and headed straight to Chef Wayne’s!

Springfield seems to be a city that was once vibrant and cultured but now like many cities is in decline.  At least that’s the impression one gets in the downtown area.

Sitting on the banks of the Connecticut River, it is the 3rd largest city in MA after Boston and Worcester, and the fourth largest in New England  (Providence is bigger).  That’s significant when you consider that Springfield is bigger than Portland, ME, Manchester, NH, Hartford, CT, and Burlington, VT!

Brendan is a commercial realtor in Springfield and  nobody is more aware of the economic challenges of the city and yet he has a hometown pride that made me look deeper.  It is the home of the Basketball Hall of Fame.  It is easy for visitors to scoff at a downtown area with vacant storefronts and small groups of people loitering on street corners, but the area where Brendan lives is as nice as any suburb in America and his wedding was at a gorgeous country club!  The Springfield area actually has the second highest concentration of college students in the country!

But the real subject of this post is the gem of a restaurant named Chef Wayne’s Big Mamou.  My family is somewhat used to me dragging them to restaurants that are as much about the experience as they are about the food so I think the name alone had them gearing up for one of those places.

I think they were all pleasantly surprised when we entered just in time to get the last table.  The streets of downtown Springfield may be a bit deserted but Big Mamou was hopping!

We started with an appetizer that may have been the best thing I had all night.  If there had been an entrée portion I definitely would have gotten it.  Chef Wayne’s Thunder Thigh Jerk Chicken was a boneless chicken thigh pounded out thin and served with a sauce that did not hit you immediately but finished with an assertive burn!

For entrées we stuck to the classics.  I got the House Jambalaya.  The interesting thing about this is the ingredients were shrimp, andouille sausage, and chicken, all things I love but if the dish had been served without them it would have still been a fantastic dish!  The star of this show was the rice, veggies, and the sauce around them.  Imbued with the Holy Trinity of Cajun cooking, onions, celery, and green bell peppers, this food rivaled anything I’ve eaten in Louisiana.

By the way, the award for best supporting actor would go to the toasted cheese-bread served on the side.  This had the taste of cheese fondue and everyone at the table said something along the lines of, “Oh my God that’s amazing!”

My daughter got the Red Beans & Rice with chicken on top.  This was served with cornbread that could make you weep it was so good!  The beans were so deeply flavored that one spoonful made you pause and reflect on what a beautiful world it is.  I remembered this because when we finished our backpacking trip last year this is what I ordered and it was difficult not to order it again!

My wife ordered a classic Étouffée.  It had a deep brown sauce with the flavors of Worcestershire, peppers, and sautéed vegetables and it was topped with crispy fried craw-dad tales.  It was also served with their exquisite cornbread and I made my wife trade with me halfway through because I had such food envy!

She didn’t mind trading though, because the Jambalaya was just as good and the portions were huge!

The alcohol menu is BYOB, so we brought in our own beer and wine.  The service was superb, and all of the servers seemed to appreciate what a special place this was.  They were as much a part of the experience as the food.

So if you find yourself in western New England and really hungry, I recommend this restaurant worthy of a detour.

After such a great start we knew it would be a good weekend but it would only get better as we met up with family and celebrated my cousin Brendan, and my adorable new cousin Amy.  There was lots of eating, drinking, dancing, and fun.  For all of these reasons, when I hear someone deride Springfield, I will always respond with, “I love Springfield!  Every time I go there I have a great time!”