My grandmother, Anna Veroneau Trombly, lived to be 96 years old.  She was my father’s mother, and we called her Gram.  My children called her GG for Great Grandmother, and she led an impressive life.  When she died in 2001, each of her 10 grandchildren got to select some keepsake from her house that reminded them of her.  It wasn’t hard because we had all enjoyed many holidays and sleepovers and her house was filled with interesting items that we all played with.

I was the last to get there and the house was nearly empty.  As I walked around reminiscing, I opened a cabinet and there were three boxes of index cards–her recipe files!  It’s been nearly 15 years since she died, and in the back of my mind I have been thinking about how best to share them.

The thing is, if I have learned one thing in my life it’s that the bucket list does not come to you!  So finally, I have decided to create a page on my blog where I will slowly share the rich history inside Gram’s recipe boxes.  You’ll note the title of the page is not that of a cookbook.  These recipes come from a time when fresh ingredients were often unavailable, nutritional guidelines were much different, and there was no internet.

As much as anything this is a personal glimpse at how a woman in the mid-20th century socialized.  It was clear that my grandmother would frequently flatter a host by asking for the recipe for something.  Some are handwritten and dated (many from the 30’s).  Some are typed on a typewriter using the red ribbon for the title!

They come from her friends, her daughters, and many newspaper clippings.  She received a French newspaper in the mail and some of the recipes are in French.  This was from her French Canadian roots.  There are probably 20 recipes for meatloaf and often canned pineapples are dubbed “polynesian”.  There are recipes that call for “a piece of butter the size of an egg”.  THE SIZE OF AN EGG!!! 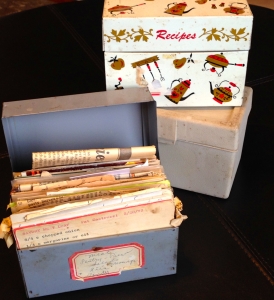 So rather than adapt old recipes to some modern standard, or even try and cook my way through them all, I have chosen to mine the rich and personal history of my grandmother through this fabulous culinary journal of hers.  At the very least I know I have 9 cousins who will eagerly read and help backfill some of the stories!

Here’s to you Gram, I hope I do it justice.

#2 – Meatloaf through the Years – A Taste Test