On our trip to Ethiopia we spent 2 days in the Simien Mountain National Park.  This vast jagged wilderness covers 85 square miles connected by narrow dirt roads with switchbacks and no guard rails.  The trip was planned by an organization called Witness Ethiopia, and every detail was perfect.  I would strongly recommend using an advance team like this one to get the most out of your trip.  One of the best parts was the very high quality of the guides and drivers.  Like a waiter in a restaurant, these are the folks who make your experience memorable or miserable and ours were all dedicated and superb.

It was beautiful country and everywhere we went there were people farming, shepherding, and trekking.  We would drive up to the highest roads and see people walking their donkeys and goats along the road.  There would be nothing around for miles!  Often it would be a young child who had apparently climbed the steep mountainsides with the family’s herd.

We traveled for almost 3 days along edges of cliffs, overlooking endless volcanic crags, and occasional green oases.  Countless scenes looked like the animated African landscapes of the Lion King! 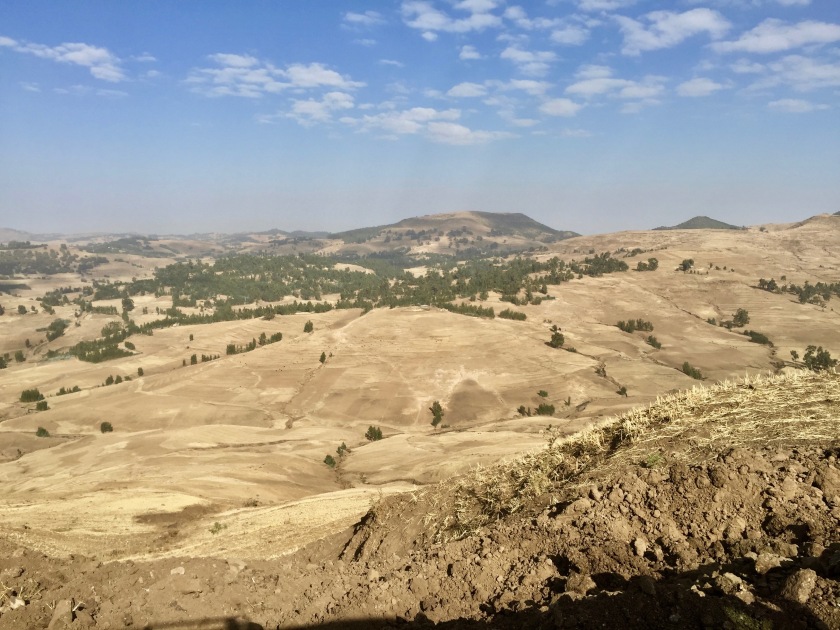 We flew from Addis Ababa into a city called Gondar where our driver picked us up and drove us 3 hours north.  This road was paved, wide, and clearly a conduit of commerce connecting villages all along the way.  It was not unusual to have to stop briefly to allow a herd of goats to cross.

We arrived at the park and checked into a brand new lodge, the Lima Limo Lodge.  Formerly an encampment of the Italian army during their brief occupation of Ethiopia, this sight has been rebuilt using native materials, environmentally friendly methods, and local employees.  I would describe it as luxuriously rustic.  Our cabin was essentially a hotel room and bathroom but in a stand-alone building adjacent to only one other room.  The roof contained a solar panel for enough electricity to power lighting, but there was no heat or air conditioning. 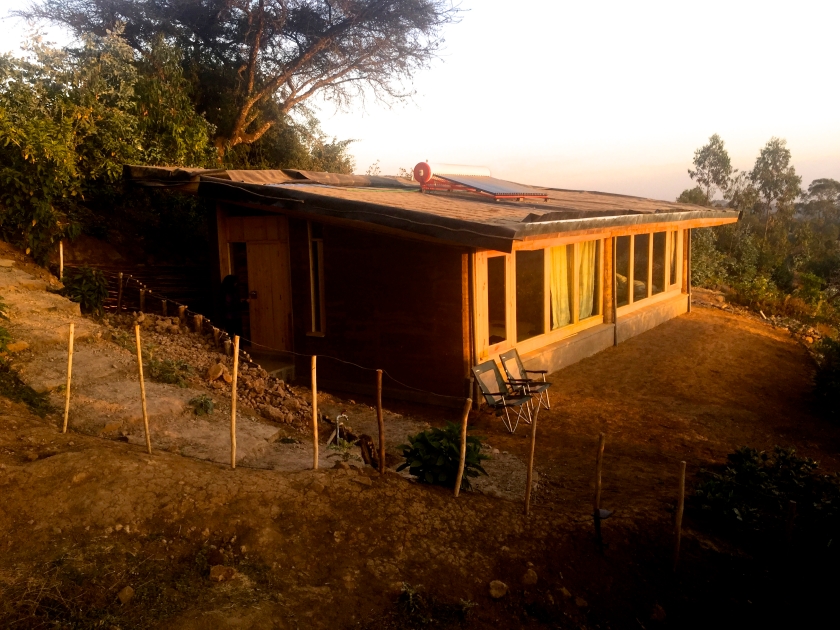 The sight was at 10,000 feet altitude so it took a bit of getting used to walking around there. When we checked in they told us the place was brand new and their dining room was not built yet.  Dinner would be a fireside meal.  We didn’t know what to expect but the sight was so charming it didn’t really  matter.

When we arrived at the site of the fireside dinner we sat on a patio overlooking a breathtaking view and enjoyed a cold Ethiopian beer while the staff got the fire going and began preparing the meal.  They essentially set up an outdoor dining room.  The meal was a delicious fusion of Ethiopian and western flavors, served with Ethiopian wine, which was quite good.

We sat and chatted with other guests and learned what brought everyone so far from home.  It was getting pretty chilly but the fire provided both warmth and a stovetop.  As we were about to make our way back to our unit, our hosts handed us two hot water bottles.

I’ve never seen or used a hot water bottle, it seems like a comedy prop from the days of Abbott & Costello, but this little old-school gem was a wonderful new discovery at 10,000 feet with no heat!  They went into velvet bags and when placed under the covers with you they kept us warm all night!

The next day we awoke to Gelada monkeys playing outside the cabin, and yet another day of perfect weather.  We made the trek up the short hill to the dining area for breakfast and there was a mist shrouding the view.  Through the mist was layer after layer of mountains in an endless horizon.

It happened to be Valentine’s Day and as the mist burned off, there, on the distant cliffs was a natural coloring in the mountainside the shape of a heart!  The view was on par with the Grand Canyon as we sipped fresh squeezed juice and local fried eggs.

Our driver came to pick us up and take us deep into the National Park.  We passed through a bustling small town called De Bark.  It was more of an intersection than a town, but it was a vibrant marketplace and there were tons of people buying, selling, herding, and socializing.

We drove first to the Simien Mountain Lodge where we would be staying that night.  We checked into the “highest lodge in Africa”. This one was at 10,600 feet!

The rooms here were also separate buildings from the main lodge and built to resemble traditional Ethiopian houses called Tewkels.  This was a legendary establishment built to serve large groups and still preserve the quiet charm of this remote part of Ethiopia.

We left our bags, had a quick coffee and set out for the town of Chennek.  This would be a long harrowing drive of steep dirt roads, switch-backs.  By this time we had an entourage of a driver, a guide, and a park-required armed scout.  The scout carried an old Kalashnikov rifle as required, even though there is no dangerous wildlife, and no crime. 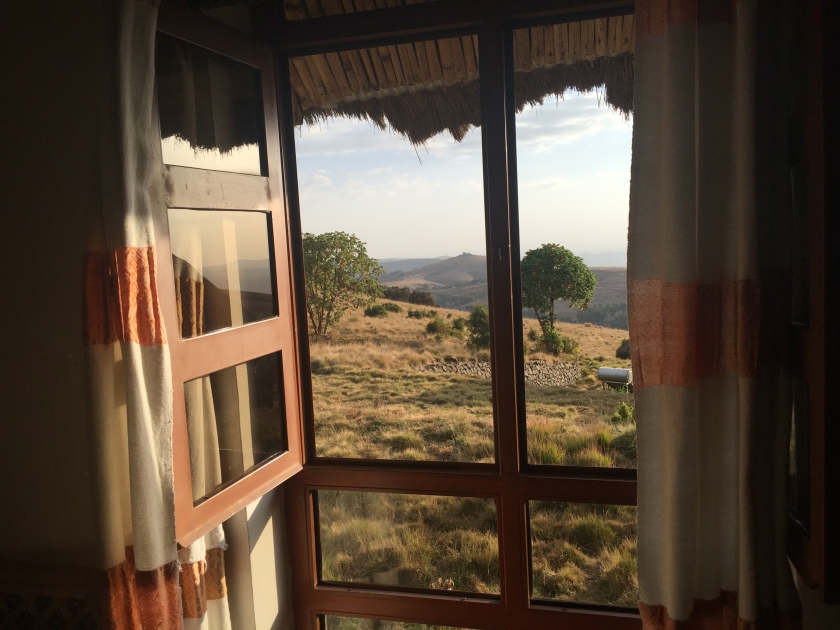 We traveled in a van and thanks to our skilled driver, navigated the 60 kilometers of mountainous tracks.  At times you could look out the window and see over the edge of the road straight down hundreds of feet.  Massive trucks that serve as city buses would speed by leaving clouds of dust that looked like a storm was approaching.

The scenery was breathtaking.  In every direction was beauty and overwhelming vastness.  It was the dry season so there was a lot of dry brown landscapes but the mountains are also made of rock and would channel water to certain green lush paths down to fertile valleys.

Here and there we would see Gelada monkeys.  At times I heard them called monkeys and other times baboons.  These friendly and very social animals live in large communities so we never saw just one.  We would see hundreds at a time!  The video in this post captures them scurrying across the road as a massive truck-load of people steams by.  As they run across the road into the field you can see hundreds of them across the hillside. 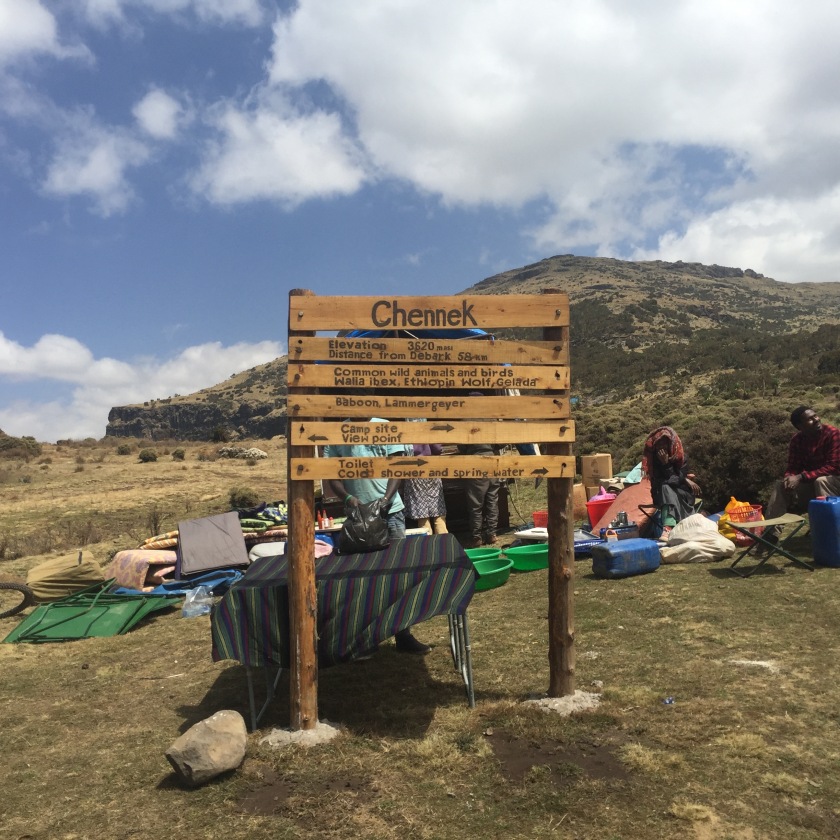 When we arrived at Chennek we were at 12,000 feet and looking anywhere we could for a little oxygen.  Now it was time for hiking!  Our guide took us down a short trail that was thankfully not a steep climb.  There were cliffs and peaks in every direction and we could see wildlife, and surreal scenery.

The harrowing trip had been well worth it.  We stayed a while and ate the box lunches the hotel had packed for us.  The weather was pleasant, the views magnificent, and never before had I been anywhere so incredibly remote! 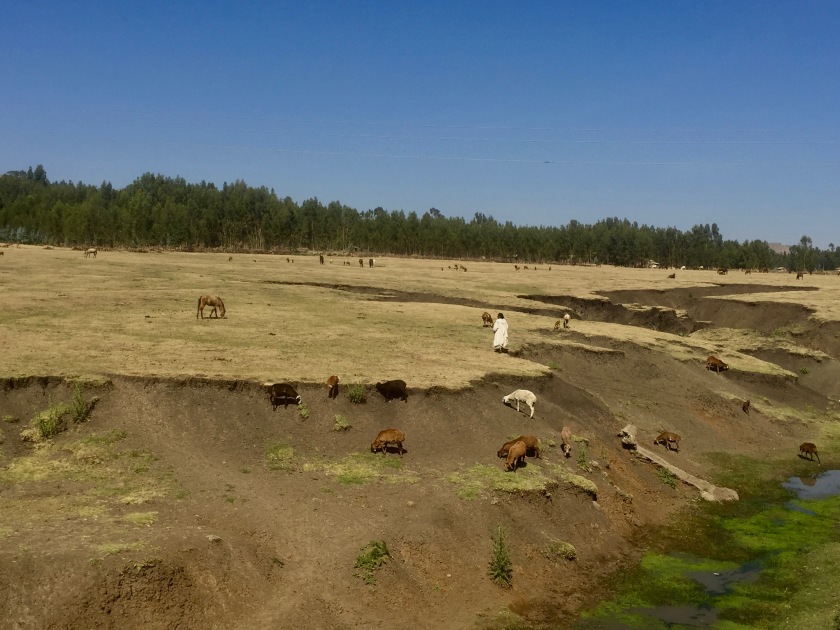 We would occasionally see water, a small spring, a stream, etc.  You could see it from way off because there would be a strip of green along each side of it, and lots of people and their animals making the most of it.

On the long ride back to the lodge we laughed and joked with our guide and driver, even playing word games.  This is pretty impressive given that English is their second language.  They were fantastic guides and clearly proud of their beautiful country. 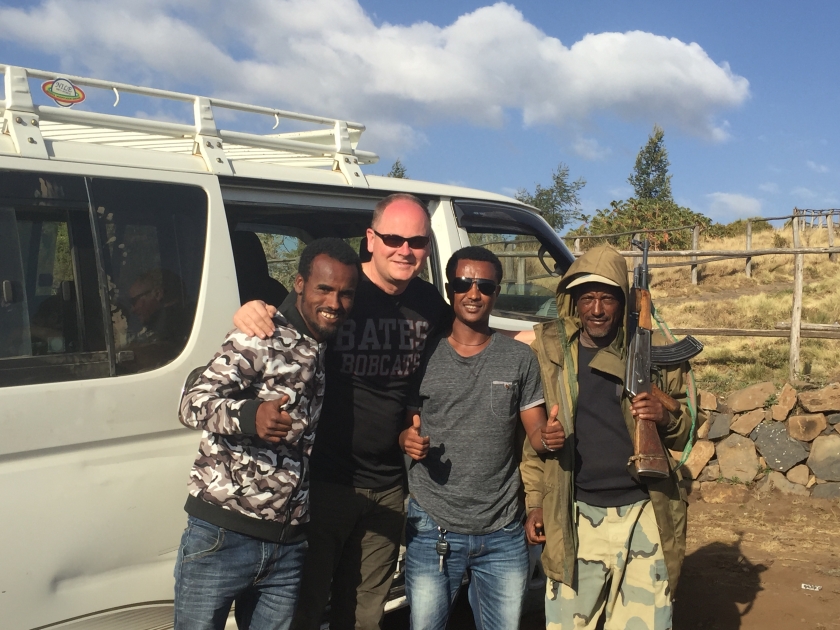 The next day we drove back along the main highway to Gondar with the memory of this amazing wilderness.  Gondar is a small city and the day after that it would be back to the chaotic metropolis of Addis Ababa.

As I mentioned, our guides and drivers were the difference between a fantastic experience and a horrible one.  Our guide Yeshi, and our driver Effrem were outstanding in every way.  Our Scout, Werko was a requirement of the national park.  He’s required to carry a rifle and uses it only for fun pictures but Werko too was wonderful, and like the others, made our enjoyment of the visit his  highest priority.