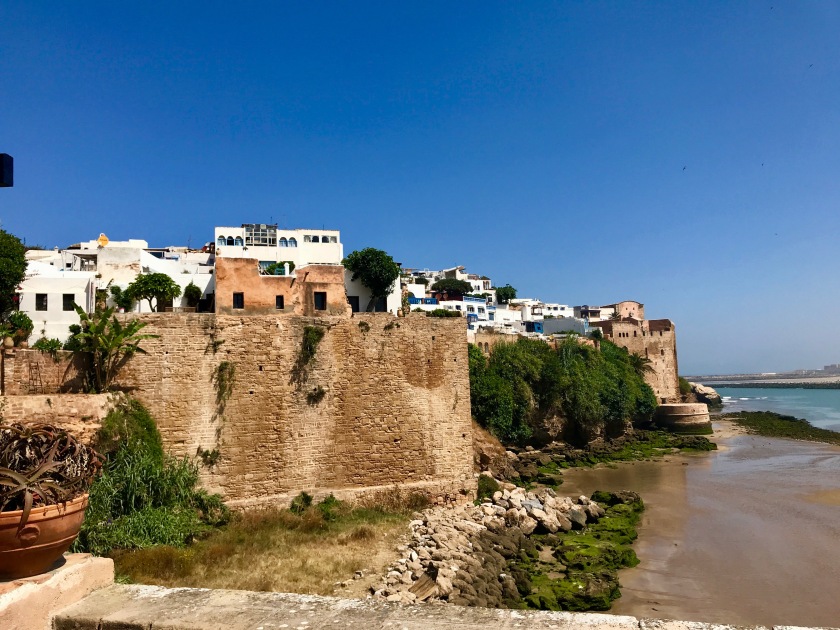 This is the final post on a recent trip to Morocco.  Heading out of Rabat, we made a stop at the Casbah (also Kasbah) and found it well worthy of its own post.

So what exactly is a casbah anyway?  We had it on our list of things to see, and of course there was the legendary song by the Clash, “Rock the Casbah”, but I had no idea of what a casbah was.  Was I going to see the casbah, or did every city have one?

If you look up the word, you typically see it listed as a fortress, a citadel, or possibly the old part of the city.  In most cases, all are true–and yes, every city has one–but there is more to it.

It is considered the old part of the city because in most cases, it was originally the whole city.  It was walled for defensive benefits, but it is what is within the walls that distinguishes it.  Far beyond just a military defense, the casbah in Rabat was an entire ancient village.  You can take a self-guided tour, but good luck.  It is a maze of alleys and dead-ends so you better know where you’re going.

We tried…and failed.  As we entered, a young man immediately approached us and asked if we were looking to tour the Casbah.  we brushed him off and said, thanks but no thanks and quickly hurried down one of those dead ends.  It’s like being a fish in a barrel because he knew full well that we would have to return right by him.  “Now do you want a tour?”

We tried one more alley only to return and say, “yes please, we would love a tour!”  The travel books all tell you specifically not to do this, but sometimes you have to go with your instincts and in this case it worked out beautifully.  For a very reasonable tip he gave us a 45 minute tour.  He spoke French and some English and was very knowledgeable and genial.

We were blessed with a gorgeous sunny day, and since it was a holiday (Eide al-Fitr) the crowds were sparse.

Officially known as the “Kasbah of the Udayas“, it was built in the 12th century.  In 2012 it was added to the list of UNESCO World Heritage Sites.  It contains a palace, once the home of the Caliphate, and a mosque.  It is also a village of homes and people still live in them!

My home in Arlington, Virginia is considered an “old house” because it was built in 1923. So in 5 years my house will celebrate its 100th birthday and here we were strolling past homes that are over 800 years old!!!

Our guide walked us through the warren of alleys showing us doors to people’s homes.  Many would have the date it was built, the name of the family, and some significant decoration.  It was similar to a crest, or coat of arms.  Many would have dates in the 1100’s.  One had verses of the Koran, in Arabic of course, written around the doorway.

A Coat of Arms Style 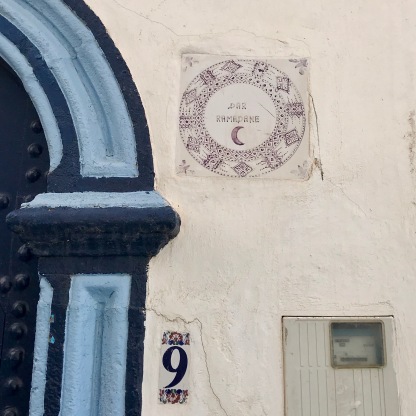 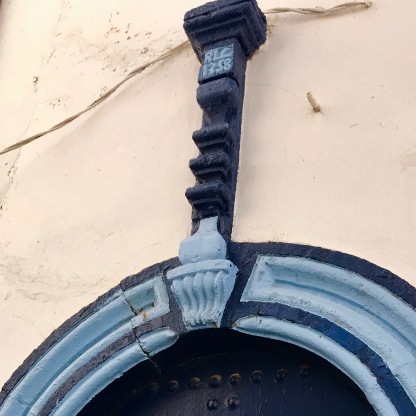 As we wandered through the complex, we came to an open area, a gathering place.  It looked out over the Atlantic Ocean.  To the left was an ancient cemetery reserved for residents of the Casbah.  To the right, the Bou Regreg river, separating the cities of Rabat and Salé.  It gave you a faint sense of what it might have been like to live here centuries ago.

Sun-drenched and peaceful, every corner of the Casbah was pleasant.  The dominant color was a marine blue, and a whitewash no doubt further bleached by the sun.  There was an upper level and a lower level, there were gardens, terraces, and gorgeous views.

You could easily forget for a little while that you were actually in a large modern city, but it wasn’t far in the distance.

So what about the song?  In 1982 the Clash released its hit song, “Rock the Casbah”.  After countless keg parties dancing to that song in college, I had to admit, I had only a vague idea of what it was about, and no idea if it was about a specific casbah.

Here’s what I found.  It tells the tale of an Arab king banning rock music and the people thoroughly rejecting that ban by “rocking the casbah”.  The king was fictional, but only nominally so, since the 1979 Islamic Revolution in Iran did indeed include a ban on western music.

The song went on to become an anthem for various political causes, ironically symbolizing the “clash” between western and muslim culture.

My next post will begin a series on my visit to Portugal.  Spoiler Alert:  The Algarve is a most delightful place and I would move to Lisbon tomorrow if I could!