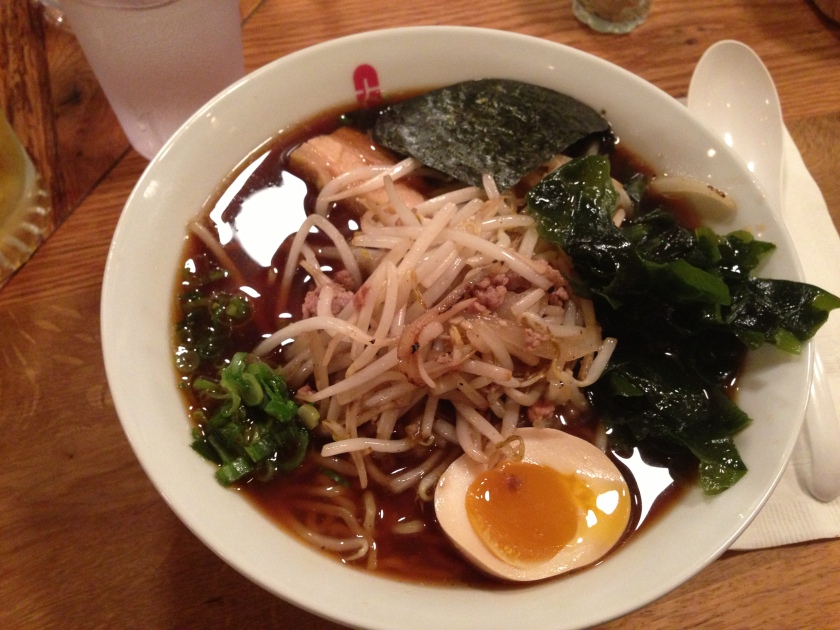 Daikaya is open standard restaurant hours; but, it has the look and feel of an after-hours hot-spot, the sort of place other chefs might go when they get off work.  It is edgy and hip.  The food is authentic.  Although I have never been to Japan, I have been to Honolulu a few times.  The tourist crowd in Honolulu is at least half Japanese and they flock to the Ramen houses there and this rivaled anything I tried in Hawaii.

One thing that gave the place an edgy urban feel was the absence of kitschy Japanese costumes or music.  No pingy mystic folk music in the background, this was all Nirvana, Stone Temple Pilots, and I even heard a Lou Reed song while I was there.  The chefs and servers wore jeans, piercings, and tattoos.

The food exceeded expectations.  The menu is lengthy enough that I will need to make several trips to try everything but the waiter helped guide us to the essence of the menu, the type of dish he suggested was truly representative of the cuisine.  For me it was Shoyu Ramen, a rich dark broth with flavors of soy, garlic, and toasted caramel flavors.  The broth is the begining, then you choose what goes in it.  I went with braised pork belly and nori seaweed.  There was also, of course, noodles.  It was intensely satisfying and I left already planning another trip back!

One surprise hit feature in the noodles was a special egg.  As soon as my friends and I tasted it we knew it was something special.  The yolk had an almost custard consistency and the flavor was unlike any thing I can describe other than a faint hint of sweetness.  We learned that they are soft boiled, peeled, and then marinated!  Seriously, a marinated soft-boiled egg!!!  It was so delicious that we all agreed we would ask for extras when we returned!

Upstairs is really a separate restaurant entirely.  It even has its own entrance outside the downstairs Ramen shop.  It is called Izakaya, and is essentially a bar, but even if the noodle shop was not downstairs, this would be a very cool and special bar.  It has a great feel, a gorgeous bar, and fantastic service.  We had actually stopped in to see the son of one of our buddies who works there and when they told us it was Sam’s night off the rest of the staff somehow felt they needed to make it up to us!

The bartenders there seem destined to make you a special cocktail!  While there I asked if they had any noteworthy scotches and they offered me one I had never heard of.  It was by a blender called Compass Box and it was called “Peat Monster”!

We have subsequently gone back to the bar on a night when our friend Sam was working and the drinks were exceptional!

I predict Daikaya will quickly become a classic hangout for many and will spawn additional noodle shops.  We will be none the worse for this but I think I will be part of the crowd who frequents this spot!