On a recent adventure downtown friends and I saw a restaurant we had heard was about to open.  We looked in the windows and saw that drywall was still going up but a couple weeks later they were open.  It is a beautiful upscale, yet casual place a block from the Verizon Center and “North of Pennsylvania Ave”, or “NoPa“.  Check out the pictures on their website because mine do not do it justice.  The space is really warm and impressive, looking out huge windows onto the Penn Quarter neighborhood.  It is a pedigreed restaurant, the type that owners and management refer to as a “project” rather than a restaurant.  This “project” is the work of the Knightsbridge Restaurant Group which has brought us uber-successful restaurants such as Bibiana, Rasika, Ardeo, and 701. 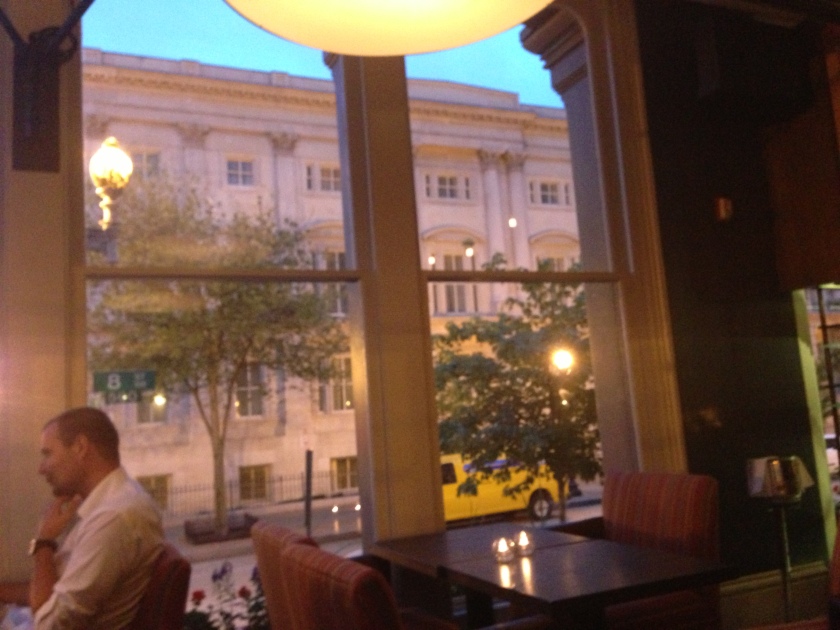 I have no doubt this will see the same level of success.  The food was flawless.  It is billed as an “American Brasserie” and is again, upscale, yet casual.  Sitting in the posh bar area I felt like I was in a magazine ad!  The menu and service were up to the challenge that the ambiance posed.  We started off with a crispy soft-shell crab in an avocado puree.  I wasn’t sure how that combination would work but there was also a slightly spicy sauce as well.  The dish was as visually appealing as it was delicious!

We followed that with a Duck Confit with Sour Cherry Mustard.  Again, the combination of flavors showed great skill and creativity.  The duck was crispy on the outside and perfectly tender and moist on the inside.

In addition to a great menu they of course offered an excellent selection of draft beers, and specialty drinks.  We were there on a Saturday night and I was surprised that it was not more crowded in the bar area but the dining room was full.  By the time we left the bar area too was humming.

I followed the duck with a standby favorite of mine, not the biggest culinary challenge but the Frisée Salad with Poached Egg is such a decadent simple dish.  As that yolk breaks open and blends with the dressing it becomes what I call the “poor man’s hollandaise”!

The entree we chose (and split) was a culinary triumph.  It was a pork chop that had been cooked with sweet mustard, spiced peaches, and Lacinato Kale (which is a deep smooth green kale, almost resembling spinach).  The peaches imparted only a hint of sweetness, and had clearly blended with the flavor of the pork.  The whole dish came together as a single fantastic flavor, and was cooked perfectly!  It was a superb choice from a menu that made it  difficult to make a decision!

I am not a big dessert person but the friend who joined me is powerless to resist chocolate and thank God he is because that caused us to get a dessert that was described as all the homemade ingredients of a Snickers Bar!  If you go there, just trust me and get the Frozen Chocolate Bar!

As we finished our meal and enjoyed one more cocktail, the General Manager came over and chatted for a while.  She explained how in the last two weeks everythting had come together nicely and how they had already reached a nice balance between the front of the house (the dining room) and the back of the house (the kitchen) to guarantee not just a great meal, but a great experience.

I most certainly recommend this restaurant before your next event at Verizon, or just for an evening out in DC.