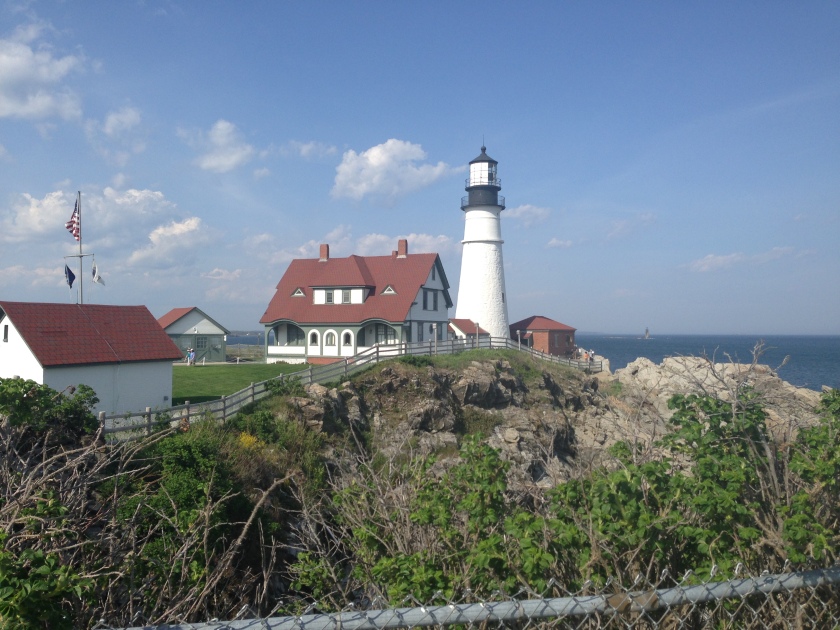 This posting is part of the series New England Road Trip.

After leaving Ogunquit, our next stop was Cape Elizabeth, Maine.  Cape Elizabeth is more or less a suburb of Portland, but it’s not your average suburb.  It’s on the water and home to gorgeous oceanside homes.  Out on the tip of this cape is Fort Williams Park, home to the oldest lighthouse in Maine, the Portland Head Light.

This spot, nearly the easternmost in the United States, is breathtakingly beautiful.  To stand and watch the surf pounding the rocky shore is inspiring.  I could not take enough pictures of the lighthouse with the 18th century Keeper’s Quarters at its base.  Behind looms the Atlantic Ocean and you feel like if you looked hard enough you could see Europe.

From Cape Elizabeth we headed to the Old Port section of downtown Portland, Maine.  This is a very charming city and walking among the restored old buildings with the smell of sea air feels like you’re on vacation!  We stayed at a brand new Marriott property called The Press Hotel. This is the former headquarters of the Portland Press Herald.  The hotel is decorated in an artsy homage to the newspaper and journalism business with typewriters adorning walls, and tasteful decor reminiscent of the era.  It’s also right in the heart of Old Port and a great location from which to see Portland.

That night for dinner we were meeting my cousin Pam and her two kids.  If you’ve been keeping track of the “cousins who don’t own a winery tour” Pam would make the 4th cousin visit on our trip and her kids would be the 2nd and 3rd C1R’s, (cousins-once-removed).

Pam picked pretty much the perfect spot, the Flatbread Company.  While I think Flatbread Company might be a franchise, this place feels like a unique one-of-a-kind restaurant and bar.  They have a very impressive collection of craft brews, mostly from Maine.  It’s right on the water and has really nice outdoor seating and the food, service and beer were all extraordinarily good!

I tasted a lot of good beers while in Maine and they have a really vibrant craft beer scene.  By far, however, my favorite was from a small father and son brewery in Lyman, ME called Funky Bow Beer Company.  Their story is rather poignant and their beer is unforgettable.  If you are a fan of citric, piney IPA’s, you have to try the aptly named, “So Folkin’ Hoppy“.  One of my first tasks upon returning home will be to get this beer in Virginia!

We sat outside and ate and visited and I got to know my young cousins, two adorable fun-loving kids who immediately started horsing around with me (I am powerless to resist acting like a kid).  We took selfies and stole french fries off each other’s plates and had a really nice time together.

After dinner we said goodbye and wandered off to sample the nightlife of Old Port.  I had spent some time here during college, but that was during early Reagan administration so most of it was unfamiliar.

There was, however, one treasured and familiar site.  3 Dollar Dewey’s is an institution in Portland and in what I believe is its 3 location.  Back in the early 80’s my friends and I would visit Portland on the weekends.  It is about 40 minutes south of Lewiston where we went to college and 3 Dollar Dewey’s was a favorite place with its communal tables, board games, and even then an exotic selection of beer.

A Portland institution, 3 Dollar Dewey’s was a must-stop location from my youth!

The name of the place is rumored to come from a sign in a brothel that read, “$1 Lookie, $2 Feelie, $3 Dewey”.  This story is printed on their menu’s and lives on.  We had a couple more great Maine-based beers and chatted with the bartender and a couple folks at the bar.  It was great to be back!

The next morning we set out in search of breakfast and didn’t have to go too far.  The Holy Donut is a true gem!  Their donuts are made with real Maine potatoes–not potato flour, mashed potatoes!  The Old Port location is charming and the flavors are like entire meals.  For me it was all about the Maple Bacon donut.  It was like bacon, pancakes, and donuts all wrapped into one meal.  I’ll admit that I have eaten a lot of donuts in my life, but I will never forget this one!

That afternoon we were off to Camden, Maine and then it would be Lewiston to retrieve our daughter from college; so, our tour of Portland was a brief overnight but I highly recommend a visit to this charming New England city!