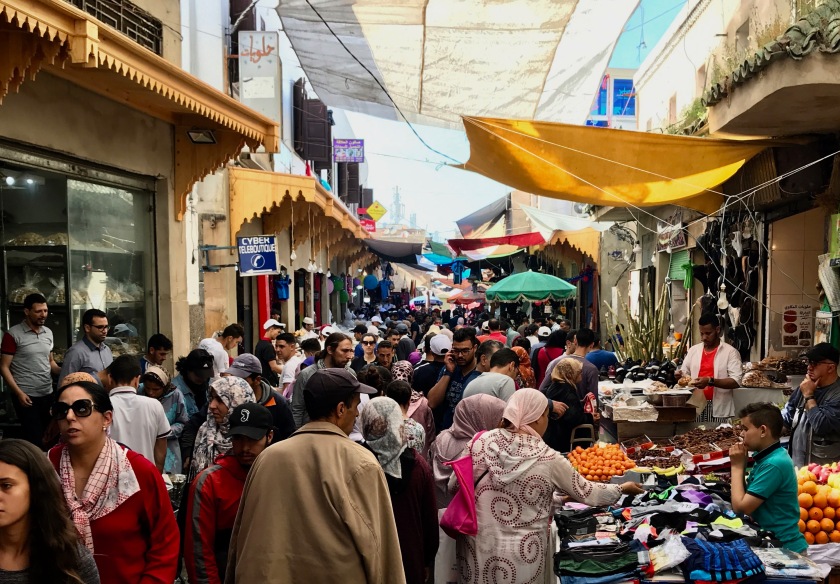 As mentioned in my post on Casablanca, our destination was really Portugal, but the best flights were on Royal Air Maroc, changing planes in Casablanca, Morocco.  There was no way I was going to change planes in Morocco without seeing the place!

We could add 2 days to our trip, but that was all; so, a venture to one of the legendary destinations like Marrakesh, Tangier, or Fez, was out of reach.  But we could spend a day in Casa, and a day in Rabat, the capital city one hour to the north.

People familiar with Morocco describe Rabat as a great city to start with.  It is smaller, calmer, and more manageable.  We only had one day, so the list of what we would see was short.  The Medina, or marketplace, the Casbah, a walled fortress village, the Hassan Tower, and the King Mohammed V Mausoleum.

Rabat is on the Atlantic Ocean, 150 miles south of where the Mediterranean Sea empties into the Atlantic.  It is sunny, clean, very friendly, and vibrant.

We booked a hotel in the older part of the city, walking distance from the train station and all the sites we wanted to see.  It seems all Moroccans speak Arabic, French, and English.  Impressive when you come from a country where everyone studies a foreign language in high school and few can speak one!  This made getting around easy.

We took the train from the Airport to Casablanca, and from Casablanca to Rabat.  It was easy to navigate the train system and the ticket price was very reasonable.

Our hotel, Hotel La Tour Hassan Palace was  perfect!  Posh and luxurious, with a very Moroccan feel and a budget-friendly price, the staff was gracious and helpful and made us feel immediately at home.  We were greeted by a doorman with scented cool towels.  Our room looked over a lush courtyard with pool, patio restaurant, and beautiful gardens.

It was the second to last day of Ramadan, and I asked the concierge if we could participate in the Iftar.  This is a traditional Moroccan feast at sunset to break the fast.  They had 3 restaurants and one of them served just such a feast!  Even though we are not muslim, and were not fasting, he welcomed us.  More on that below!

We dropped our bags and set out for the Medina.  This is an open air marketplace where one can find just about anything.  Bustling and crowded, this is not a tourist attraction, people are there doing their daily shopping, with a lively social scene.

There was a lot of clothing vendors, baked goods, fish, meat, spices, produce.  Here were many of the same foods I see in my Virginia grocery store, but with a magical elevated quality,  attractively stacked and simply displayed. 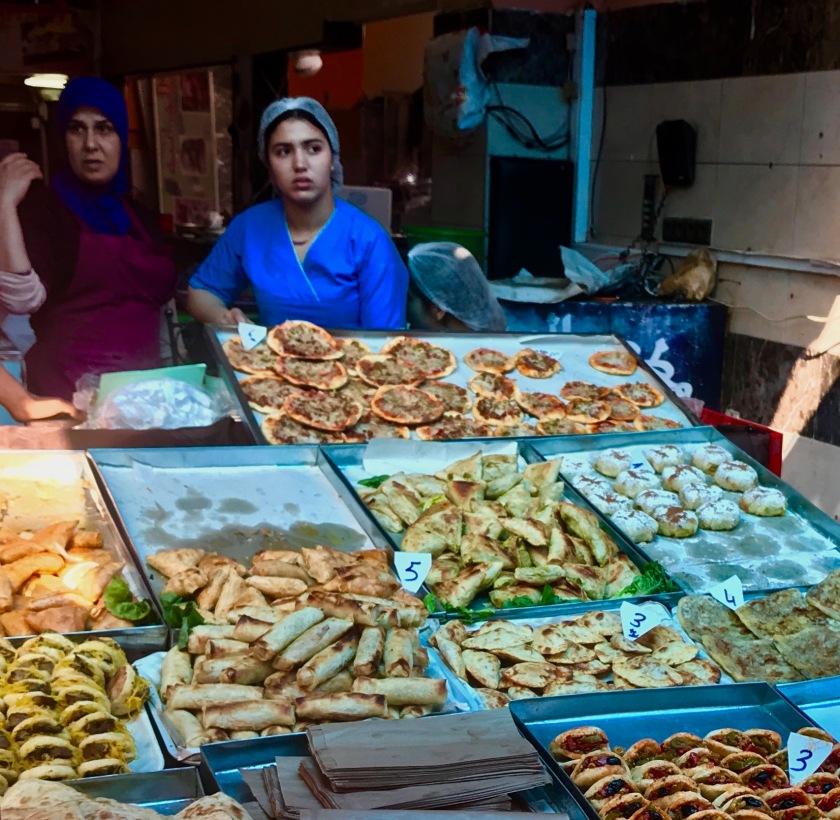 At a spice stall, I haggled–in French no less–over a kilo of harissa the north African spice mix used in many Moroccan dishes.  It’s not that the merchant was asking too much, it’s just what you do!  He wanted 10 dirhams, I said, with my rusty French, “You are making me laugh, I will give you 5 dirhams”  He clutched his heart and explained that at 5 dirhams he would go out of business but offered 8.  I agreed that I could possibly pay 6 and ultimately we agreed on 7 and parted as friends.  It makes a trip to the market a hell of lot more interesting!

The whole place feels like it hasn’t changed much in 500 years!  Everyone was very nice.  My French has a weird accent that people cannot identify; so many asked where we were from which would start a friendly conversation. 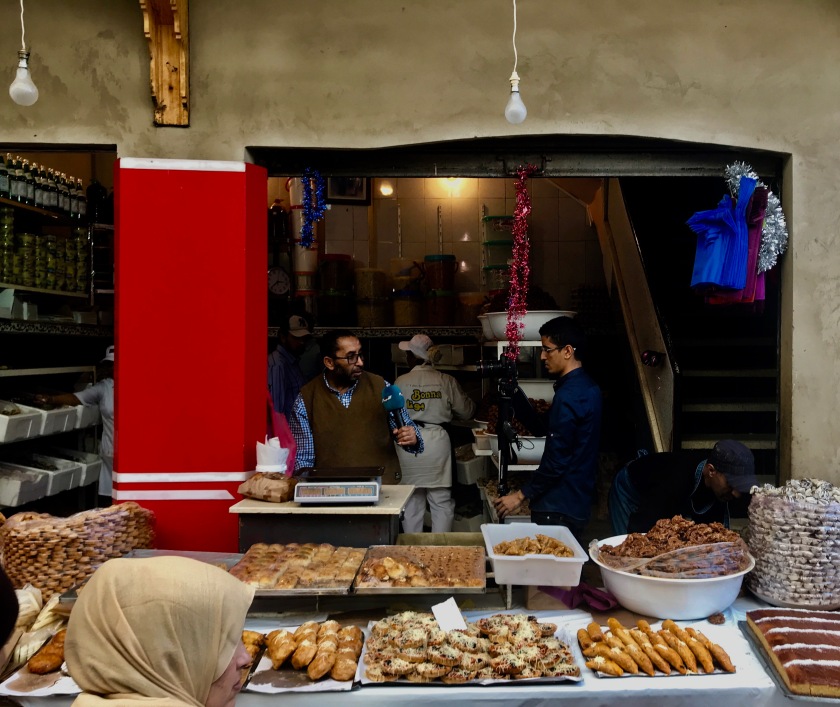 From the Medina, we walked to the Hassan Tower.  In 1199 the Caliph Abu Yusuf Yaqub al-Mansur commissioned what was to be the biggest mosque and minaret in the world.  At the time of his death, the minaret (Hassan Tower) had reached a height of 44 meters, half of the intended height.  The mosque was left incomplete and today there are some of the walls and columns remaining.

Here a quick bit of history is in order.  Mohammed V was a 20th century leader of Morocco.  He was born in 1907 and was the Sultan of Morocco until the mid-1950’s.  Being a French colony, Morocco was entangled in the Vichy government of France in World War II.  Morocco was home to a lot of Jews and Germany attempted to exert control and extend the holocaust to Morocco.

Mohammed V resisted (and to be fair, there is debate around his role.)  He ended up being exiled for half a decade, but In 1956 he returned as Sultan and won independence from France to become King of Morocco  He died the day before I was born in 1961, a beloved figure and praised by Moroccan jews.

Thus, Mohammed V was the first King of Morocco.  The second was his son, Hassan II.  It seemed as we traveled through both Rabat and Casablanca that everything was named for either Mohammed or Hassan.

At the site of the Hassan Tower is the Mohammed V Mausoleum the final resting place for both Mohammed and Hassan. 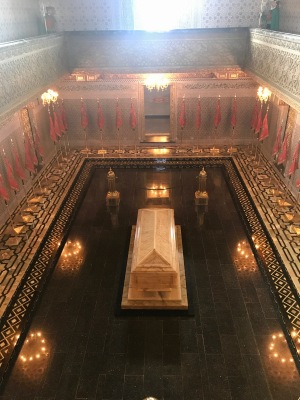 There is also a modern mosque on the site and when we went it was Friday afternoon and mosque was in session.

We left there and walked through the city taking in the sights.  It is a remarkable place and everywhere you look you see the very old next to the very new alternating ancient and contemporary as we walked. 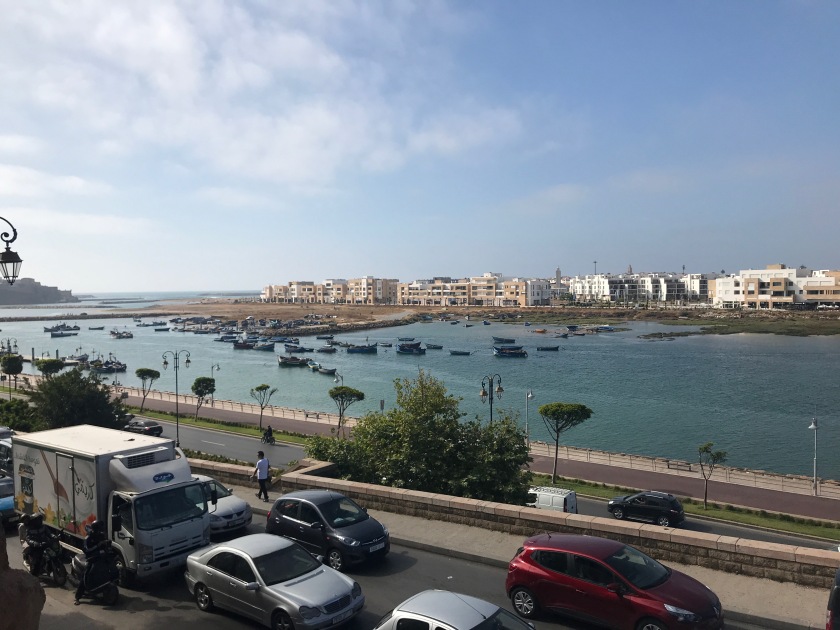 We relaxed at the hotel with a dip in the pool and a cold beverage, and then prepared for the Iftar.  Sunset was at 7:40, don’t be late!

We were escorted into a plush dining room where the tables were pre-set with the first course.  It looked a lot like a typical American breakfast with hard boiled eggs, fruit juices, and pastries.  It’s almost like after fasting the entire day they would make up for each meal one at a time!  There was also a bowl of dates, the traditional food with which one breaks the fast. 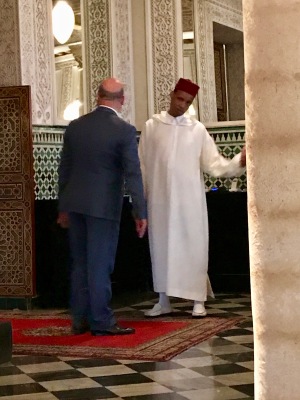 At 7:40 they played the call to prayer.  As soon as it was finished, everyone took a date and began to eat.  The festivities began and servers brought out course after course all of it fantastic!  Waiters poured mint tea from 3 feet above the cup, and dishes never seemed to be taken away, only new ones brought to us.

The big finish was the tagines.  Three tagines were brought to our table!  Out came the iconic dishes with their cone-shaped lids.  With a flourish the waiters lifted the lids to reveal a seafood tagine, a dried beef with fried egg tagine, and a lamb tagine.  It was so much food!!

After dinner we walked through the hotel with its many colorful and welcoming rooms.  We ascended the marble staircase to sleep off the food coma that was fast approaching. 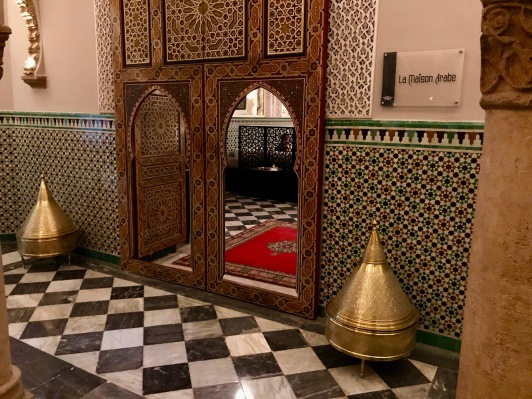 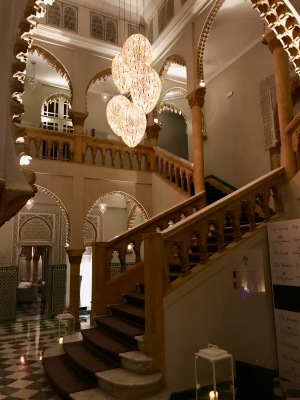 The next day, before heading back to Casablanca, we made a trip to the Casbah.  This will be described in its own subsequent post

My next post will be a recipe for a chicken tagine with preserved lemons, so I hope you started a batch of them!