Our tour began with a ride on the back of a scooter through downtown Saigon.  The traffic is 75% motorbikes, and they drive as if there are no signals.  At major intersections there are some traffic lights, but they don’t even have to stop if they’re turning right.  What’s interesting is that when there are effectively no rules, everyone drives carefully.  Think how often you speed through an intersection when you have the green light; it’s because you don’t expect anyone to enter from the side street.  But if you expect it, you treat everything like a big traffic circle!

So as I sat on the back of this young man’s motorbike, watching other bikes come perilously close, head right for us, and swerve around us. Over the course of the night, I went from scared shitless to growing used to it, t actually checking my messages on the back of the bike!
Our first stop was in District 3 was to a place called “Mien Tay 335” that is all over YouTube as having the best Banh Xeo.  Banh Xeo means literally “sizzling pancake”.  It is a pancake made with rice flower and turmeric (which is responsible for its beautiful golden color) dropped in oil in a wok (hence the sizzle).  It is then filled with things like ground pork, shrimp, sprouts, etc.

This place made fantastic Banh Xeo (pronounced “Bahn Say-oh”) but they also made a really delicious variation called Banh Koht (“Bahn-Coat”).  If Banh Xeo is a pancake, Banh Koht is a cupcake version.  Made in small individual circles it is one or two bites, easily with one’s hands.
What makes all the difference is the various greens and herbs, sauce and seasoning that are added at the table.  Our guide was a 26 year old woman named Nana.  She had us try 5 or 6 different greens individually.

One was sweet basil, one was a sour leaf, one was a fishy tasting green and one was bitter.  She then mixed them all together and rolled them with a piece of Banh Xeo in a big piece of lettuce.  We ate it like…well…a lettuce wrap.

The flavor was transformative!  All of those flavors, sour, sweet, fishy, bitter, had blended into a symphony that hit the tongue as one.  This also included some chili paste for heat. 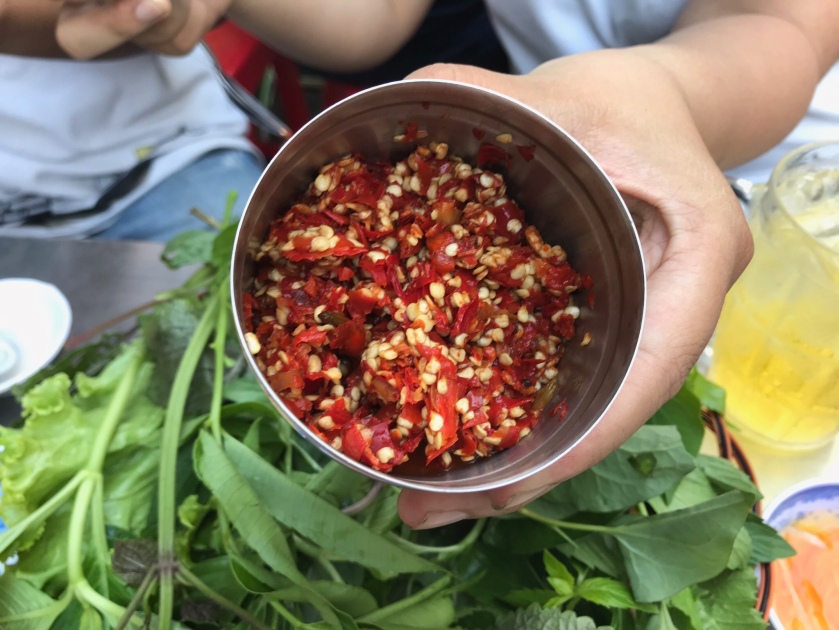 The Banh Koht was equally good but different.  dainty in its appearance, I felt you got a more concentrated bit of the pancake batter which made it richer and creamier.

I wish Nana had told us to have one and no more because we ate a lot of this not quite appreciating that this was stop 1 of 10!
The tour had begun with a solid gold (literally) hit!  I will not cruise Northern Virginia vietnamese restaurants when I return for the best of each food!
TT