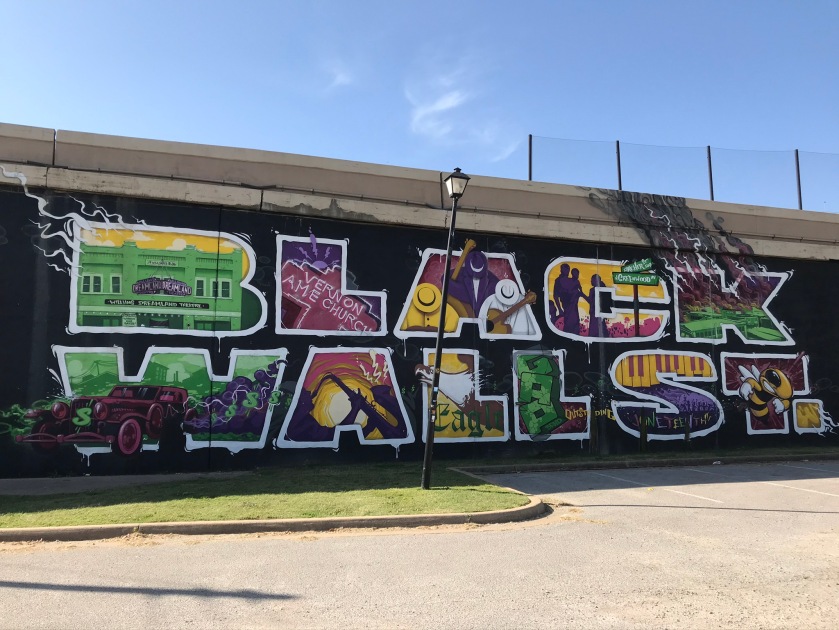 As predicted, we were moving a bit slowly this morning! We started with a few pics of our fabulous hotel, the Ambassador. This was a great memory and Tulsa is now one of those cities I will be excited to visit again.

After a stop at a downtown Starbucks we made our way to the Greenwood district, better known as “Black Wall Street”. This was once the site of a prosperous and affluent black community. There were African American doctors, lawyers, and businessmen. The community was a model for African-American communities around the world.

In late May, 1921 a young black shoeshine vendor was accused of assaulting a white woman. As so many of these stories go, people called for the young black man to be lynched. When his community defended him an altercation broke out and shots were fired. That was all the white mob needed to move in and destroy 38 blocks of the Greenwood district. Black people were gunned down and murdered in the streets, homes were burned and businesses were destroyed. And I’ll bet you every person in that angry white mob would have insisted they were not a racist. To visit a spot like this, to feel the remnants of hatred and injustice makes it hard to just roll on to the next tourist site. It stayed with me all day and would pop back up when I did not expect it.

On the way out of town we made a brief stop at the Tulsa Expo Center to see the Golden driller. This symbol of oil-rich Oklahoma stands tall and proud. His belt is 48 feet around, and he stands 75 ft tall and bears this inscription:

“The Golden Driller, a symbol of the International Petroleum Exposition. Dedicated to the men of the petroleum industry who by their vision and daring have created from God’s abundance a better life for mankind.”

Inscription at the base of the Golden Driller

As we drove southeast, we passed through Muskogee, OK. I was in the DJ seat and put on Merle Haggard’s “Okie From Muskogee”.

“We don’t smoke marijuana in Musogee”. Ironically we found both OKC and Tulsa to be dotted throughout with dispensaries that advertised with billboards. “We like livin’ right and being free…we don’t let our hair grow long and shaggy…like hippies out in San Francisco do…we still wave Old Glory at the Courthouse…and kids here still respect the college dean”

excerpts from Okie from Muskogee

And there it was, the simmering feelings of what happened in Tulsa’s Greenwood District came boiling up through this self-righteous arrogant song. All of this year’s divisive politics, seemed encapsulated here. I just couldn’t listen to it any more and Tim agreed. Here was a legendary country song from one of its greatest masters but it just sounded like a “law and order” political speech! We continue to struggle with the music.

With that we were off to Arkansas. The sight of that sign was really exciting as it was my 49th state visited. I have only Michigan left to visit to have seen all 50 states. I will, however, let things settle down a bit up there before heading to the Great Lake State.

We were headed to Little Rock, but first we made a stop that Tim found, the Popeye Garden in Alma, Arkansas. While a pleasant spot, I’m not sure why this is rated on road trip apps as a popular stop. Alma calls itself the “Spinach capital of the world” and Popeye has always been popular for that reason. This, however, is just a small neighborhood park and there’s not even a plaque explaining it. I will say though, Popeye has been working on his glutes!

Around 4:30 we rolled into Little Rock. This was really exciting and the city is a bigger than I expected! With a population of 200,000, it’s not a huge city. Tulsa, for example is twice the size. But they have a great downtown River District with restaurants, bars, jogging and bike paths, and lots of tall buildings. It sits on the Arkansas river and we are staying at the Little Rock Marriott right on the river.

We immediately got out on the streets to explore the city. We found a comfy local spot called Stickyz with a great outdoor patio. They served cold local draft beer and “Stickyz Chicken Fingers”. After dinner we continued to walk around and see the sites.

As of today we have covered 2,400 miles, 8 states and 3 of 4 time zones. One thing for sure is that we have tired Gus out! He continues to get us great tables in restaurants and attention from all sorts of people, but he’s ready for a rest! Tomorrow we will head to Tennessee and into the Eastern time zone.

Line of the Day:

Tony: why is he pressure washing the highway now?
Tim: I don’t think it’s water, I think it’s dust.
Tony: Why would you spray dust onto the road?!?