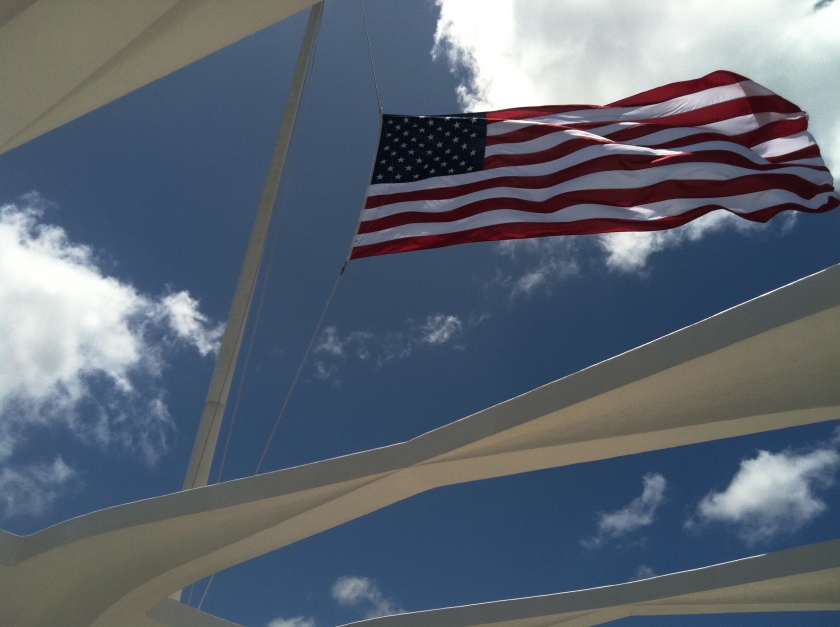 Day 3 was Memorial Day and we decided to put beach and relaxation on hold for a day and visit Pearl Harbor.  What a great place to honor those who gave all for our safety!

The real attraction at Pearl Harbor is the USS Arizona Memorial, however the site also includes a tour through a submarine, the USS Bowfin, and a tour through a retired battleship, the USS Missouri.  They now refer to it as the Monument to Pacific Valor.

Everyone you talk to here says to get there early.  We arrived at 9:00 am and they handed us tickets for the 11:00 group.  This actually worked out well because it gave us time to visit the Bowfin first.

The Bowfin is an actual World War II era submarine and with an audio tour.  You walk through it and see how the crew lived, where on the ship they worked, and how things like periscopes and ballast tanks work.  It was very interesting and definitely not something I would want to do!  For starters, there were 80 men in a space suitable for about 6.  There were fewer than 80 bunks because they operated round the clock.  When it was your turn to sleep, you went and woke someone up, he got up and went to work and you got in his bed!

Then there was the issue of submarine service being the most dangerous and having the greatest loss of lives of any service!

We left the Bowfin and walked over to the USS Arizona Memorial.  This is a memorial that everyone should see.  On the day of the Pearl Harbor attack, 2,400 people would lose their lives, and 1,200 would be wounded.  Nearly half of those who died would be aboard the USS Arizona.

A Japanese bomb penetrated the deck of the ship and exploded in the ammunition magazine.  It is believe that the explosion vaporized most of the 1100 men below deck, as it instantly destroyed the mighty battleship.

The decision was made to leave it where it sat in the shallow waters of Pearl Harbor and build a memorial over the sunken ship and tomb.

When you visit the site, a Navy boat takes you out to the memorial and you can observe the wreck of the ship just beneath the surface.  Small drops of black oil constantly bubble up to the surface, black tears they call them.

in the memorial is a wall of all those who died that day.  One remarkable thing is that the designer of the monument managed to keep this from looking like just a list of names.  The room is serene and lighted by a window sculpture called the Tree of Life built into the side wall.  The room is square and the enclosure draws your attention to the wall and has a chapel-like feel.  It is a very moving monument.

On this, Memorial Day, many had lain Hawaiian leis at the foot of the wall.

One very touching feature is a small wall, about two feet high in front of it listing the names of survivors interred on the Arizona.  As those who survived have passed away, they have the privilege of being buried below with their shipmates.  The guide at the site said it is a very moving and private ceremony when it happens.  Divers take the urn across the water and hold it at the surface while they themselves are submerged.  When the family leaves, they bring it below and allow the veteran’s remains to rest aboard the Arizona.  The guide said today there are 22 living survivors with an average age of 91 years old.

The Pearl Harbor Visitor Center is overall a wonderful place to visit.  They begin with perfect weather everyday.  If you have ever stood at Arlington National Cemetery on a hot humid day you would appreciate this.  The grounds are beautiful and promote reflection and respect.  There is a series of museums and exhibits which are accessible without being dumbed down.  If you ever visit Oahu, this is a must-see.

That evening there was a local ceremony at the main beach, Ala Moana Beach Park.  It was the annual Lantern Floating Ceremony.  Ala Moana Park  is Honolulu’s version of the National Mall.  There were an estimated 40,000 people there and many had obtained a lantern they would float onto the ocean in memory of a lost one. (www.lanternfloatinghawaii.com)

The lanterns were square boxes, a candle within, on a little surfboard shaped like a home plate.  They had a rudder and would be released at sunset.

We arrived to find a huge stage and numerous big screens through the crowd for those too far away to see the stage.  The beach is crescent shaped and there were people everywhere.

Hawaii has a large Japanese population and this ceremony has its roots in Japanese Buddhist tradition.  It was, however, an interfaith event which included a rabbi, a Maryknoll nun, and many other representatives of different faiths.  By floating a lantern out onto the sea, the belief is that it allows the living to connect with the dead.  This year the ceremony was not only for servicemen who had lost their lives, but also for victims of the Japanese earthquake and tsunami, the tornadoes on the mainland, and anyone else who had lost someone special.

Throughout the day these people came to the park and obtained a lantern on which they wrote the name of their loved ones, a prayer or message, and their thoughts.

The ceremony took place at sunset and they had beautiful reflective music and a lyrical buddhist chant to music.  As the sun set, Her Holiness Shinso Ito of the Shin-nyo-en Buddhist order said a prayer and from throughout the crowd people came forward with their lanterns and walked through the crowd to the waterfront.  They set them on the water and the tide took them out.

Out on the water were traditional Hawaiian canoes, large ones that held 8 or 10 men.  They paddled through the sea of lanterns, slowly navigating across the bay.  There were 3,000 lanterns, each a beacon or star for someone lost.  They soon filled the landscape and the sun, now set made the sky a beautiful pink and orange and the silhouette of the canoes gave the scene a surreal and comforting feel.

It was not a tourist attraction and the crowd was mostly local.  I feel very fortunate to have had the experience and it was a moment of reflection and joy that I will never forget.