My wife Alice does not like to cook.  What for me is pure pleasure is for her tedious time-wasting work.  I am never so happy when I can come home from work after a long day and get my hands on the food peeling and chopping.  Alice, on the other hand will not even consider a recipe with more than 6 ingredients!

This is fine with me because I rarely have to share the kitchen and she frequently cleans the kitchen behind me.  And in truth, she will occasionally put dinner on the table–usually under great protest.

Once a year, however, she plans and hosts a dinner party in which she conceives of the menu, prepares the dish, and entertains like a socialite.  Last night was the 2011 version of this experience and for myself and 14 lucky friends and neighbors it was a treat from top to bottom!

When planning the menu she wanted something that could be prepared in a large single pot, but served individually with elegance.  She decided upon Beef Bourguignon, and went straight to Julia Child’s Mastering the Art of French Cooking for her recipe.  If you saw the movie “Julie and Julia” you will remember that Beef Bourguignon was the first recipe she tackled in her quest to cook and blog every recipe in the book.  It is not an easy one!

In addition to doing all the work normally done by me for a dinner party, she did all the work that she normally does, like the table setting, decorations, etc.  She really created a fabulous evening.

It started the night before when she began the main course.  The beef has to be well browned with bacon, onions, carrots and all tossed in flour.  It is then simmered for hours in a mixture of beef stock and red wine.  The house smelled like a savory wonderland.

I came home from work on Friday to find the richest most beautiful brown sauce I have ever seen.  If you have ever tried to create a velvety sauce like this you know this picture says it all!

The next day she sautéed mushrooms in what can only be described as a labor-intensive, multi-step process.  Then came pearl onions.  Everything was prepared for 16 people which meant tripling the recipe in the book. 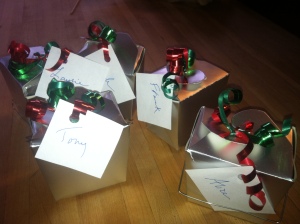 Meanwhile there were cookies being made as a party favor in a small holiday Chinese food box which would be each person’s place card.

There was also a fun and festive dessert offering that involved a decadent version of Rice Krispie treats dipped in chocolate and rolled in coconut and served on a skewer!

When it was time to serve the entrée Alice filled individual ramekins with the meat, the onions and mushrooms, and the sauce.  To give it a little extra elegance, she topped each with a round of puff pastry and baked them until the pastry was brown and bubbly.  The dish was served with a light green salad with a homemade Dijon vinaigrette that had just the right bright notes to compliment the heavier and hearty beef.

The guests arrived between 7:00 and 7:30 and there was a fire in the fireplace, a handsome bar was set up and what would ultimately be more than a case of wine was at the ready!

In no time there was a raucous volume of multiple conversations and the buzz of excitement for what promised to be a great evening.

Dinner was served at two beautiful tables and there was much calling from one to the other.  Conversation was rapid and exciting and many oohs and ahhs were heard from everyone.

In addition to the dessert that Alice made, one of our guests brought dessert and had no trouble standing up to the fantastic dinner entrée.  Our friend Laurie made a bread pudding that was decadently rich and served it with a whiskey hard sauce that could not have been offered to minors!  The combination of the rich and mellow dessert with the sharp and aromatic whiskey sauce was perfect.  I for one ate way more than I should have.

For good measure, Laurie made a separate pie for anyone who might not be a bread pudding fan.  She called this “Crack Pie” and said it was nothing but butter and sugar.  There was indeed more than that, but I do see where the name came from because one bite produced such an intense pleasure that I would have ignored all good judgement for another bite, even though it was clearly not good for me!

It is my opinion that Alice’s execution of the Beef Bourguignon was flawless.  This was a 10 on a scale of 1-10.  As always, I think the measure of a successful dinner party can be found in two factors, how long do people linger at the table after they’re done eating and how long do guests stay?

On the first count, it was 11:00 before we left the table, having crowded around the larger dining room table for dessert and conducting no fewer than 10 different conversations at once!  ( I know, the math doesn’t work out for 16 people).

It was after midnight when the last guest went home and once again, Alice had shown her inner circle that while she is not particularly fond of cooking, she’s still very good at it!

Well done Alice, and thanks to our friends for a great evening and kicking off the holiday season.