On the way home from our New England Road Trip we had to go from Maine to Virginia.  We decided this called for an overnight at the halfway mark in New York.  Our hosts would be my longtime friend and Bates alumna, PJ and her wife Dawn.  It’s always exciting to visit PJ and this trip, although brief, was no exception.

We arrived just in time for Happy Hour.  The weather and indeed the city was gorgeous!  We were in Tribeca, and looking out from their place we could see rooftop patios everywhere.  Many looked very inviting with outdoor furniture, lots of plants and even small trees, and BBQ grills.

We have visited their place on Chambers St for years but when we arrived this time we learned that they had just made an offer on a new place!  They would be moving to the southern tip of the island in the heart of the Financial District.  That night we were going there for dinner to check out the neighborhood!

Freedom Tower has redefined the skyline that was once home to the twin towers.

We set out for the Financial District, and on the way, there was the massive Freedom Tower, One World Trade Center.  It is adjacent to Ground Zero and the 9/11 Memorial.  This striking monolith is to me, a great symbol of our ability to rebound after the attacks of 9/11.

A year ago we were here for PJ’s and Dawn’s wedding and we stayed in a hotel right across the street and watched site being built. The 9/11 Memorial is  the site of the two Trade Towers and a visit there is a reflective and spiritual experience.  The site is 8 acres and filled with trees, but the most striking feature is the footprints of the twin towers.  Each has concentric square wells made of black marble and an cascade of water flows from all four sides into what appears to be an endless abyss.

The names of all of the victims who died in the Trade Towers are printed around the waterfalls.  It is hallowed ground and everyone who visits will take away their own impression.  For me, it was a solemn remembrance; but also the unsympathetic law of nature that time does not stop and inevitably we must regroup, take care of each other, and move on.

We got to Pearl St and entered the oldest and best known spot in their new neighborhood, Fraunce’s Tavern.  This was our destination for dinner.   Fraunce’s Tavern is historic enough that it has its own museum.  It was George Washington’s headquarters during the Revolutionary War and at the end of the war was the site of peace negotiations with the British.  It is considered to be one of Manhattan’s oldest buildings.

But don’t let that fool you into thinking it’s a stuffy stop on the tourist trail, it’s also a lively restaurant!  We met PJ’s step-brother and his daughters for dinner and enjoyed fun cocktails, an upscale yet casual menu and lots of lively conversation!  The place is deceptively large with bar after bar in various rooms.  There is the ultra-manly Dingle Whiskey Bar, a fun dance bar, and at least a couple others.  If this was a good sample of PJ’s new neighborhood, I’ll be back!

After dinner we walked around the Financial District and came upon Wall Street and the New York Stock Exchange lit up in purple.  Directly across the street was the entrance to PJ and Dawn’s new residence!

Diagonally across the street was Federal Hall.  Now a museum, this historic building is where George Washington took the oath of office as President.  It was the site of the first Supreme Court, first Congress, and first offices of the Executive Branch.

From there we hit the Stone Street Historic District.  This 100-yard stretch of cobblestones is one of the oldest streets in Manhattan and hosts a lot of bars and restaurants.  At night they set up outside with tents and long tables and chairs and the whole block has the feel of a European town square.  We stopped at an Irish bar and sat outside for an after-dinner drink.  The place was vibrant and bustling but as we left, around midnight, staff was folding up chairs and tables and by morning it would be an empty street.  While it may be quieter at night than the rest of Manhattan, this charming historic neighborhood was a great nighttime visit!

We were about a mile from PJ & Dawn’s place and it was a beautiful night so we decided to walk.  The nighttime views were gorgeous and as one would expect, there were a ton of people out on the streets of the “city that never sleeps”. 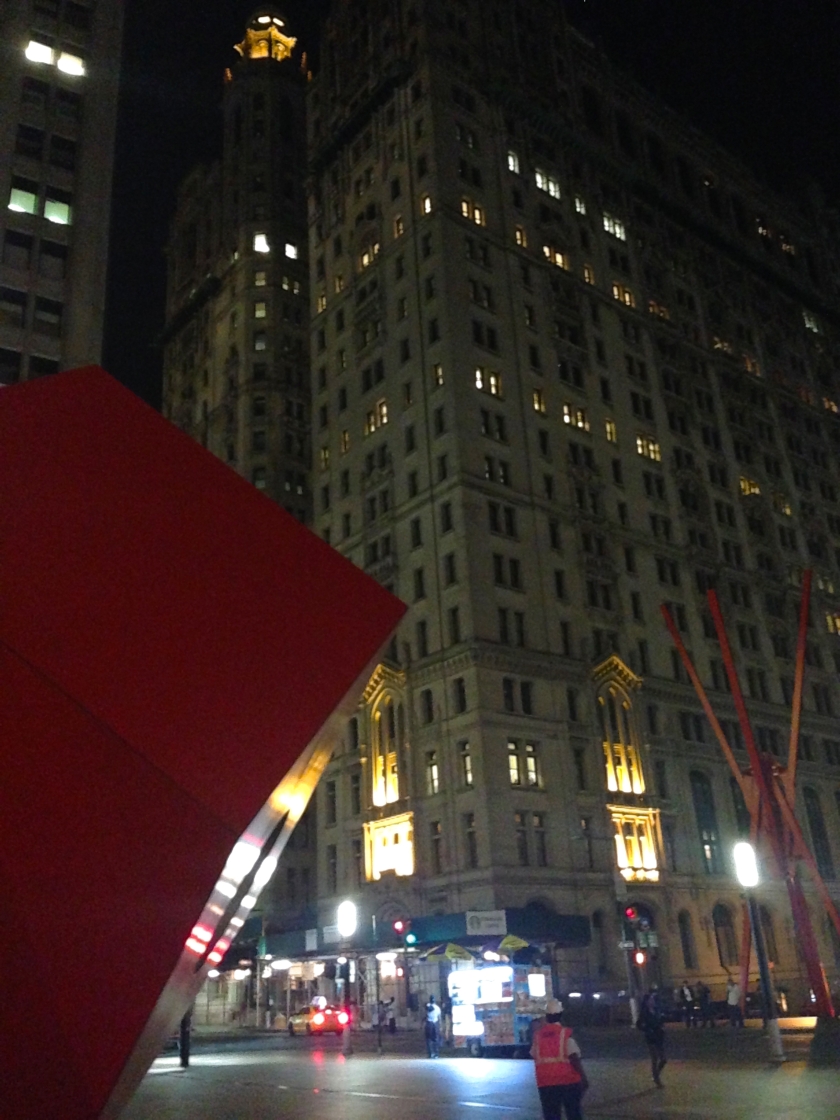 Since vacation was coming to an end, we didn’t need much arm-twisting to have one last nightcap on one last rooftop, that of PJ&D’s place in Tribeca.  Up on what I think was the 28th floor, we had a stunning view of the Brooklyn Bridge to the east, and looking north we could see the entire city. 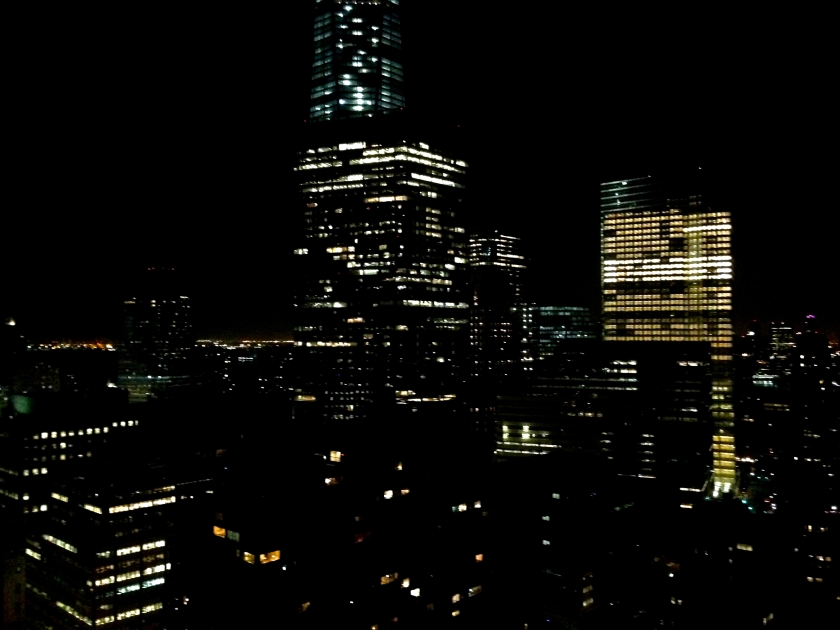 We finally decided to call it a night and the next day we would be headed home after an amazingly successful road trip.

The next morning we needed one last Bates College group shot.  PJ grabbed a couple Bates mugs and our newest bobcat Margaret, was already representing with her shirt.

It was time to head home and I would go on to take all summer long to write about this one week road trip in May.  New York was the perfect place to celebrate one last night of vacation with longtime friends.  Now it was back to Virginia.