Recently my son Andrew discovered this video recipe for hot pepper sauce.  Chris de la Rosa at Caribbean Pot has a great website on Caribbean food and his videos are very entertaining.

In his video, Chris goes to his garden and  picks some deadly hot peppers and using a traditional hand-crank food mill makes this pepper sauce.  Andrew and I tried a small batch according to his recipe and it was good; but we felt we could make a variation more suited to our tastes.

The last time Andrew appeared in the blog was a November trip to Colorado.  We’ve had a number of memorable adventures together but we hadn’t collaborated in the kitchen much.  This time, it would be a father and son batch of Virginia-Style Caribbean Pepper Sauce!

We started the day by going out to breakfast–always a good start–and then headed to the Farmer’s Market.

The nice thing about the end of summer is that all kinds of peppers are at their best at the Farmer’s market and inexpensive.  Andrew and I decided we would use a blend of hot and sweet peppers so that it would not be so incendiary.  We wanted it to have a kick; but we also wanted something that could be used freely and served on top of everything!

We also adjusted some of the ingredients, including substituting lime juice for vinegar, and roasting a portion of the peppers for added flavor depth.

For the sweet peppers, we used vine-ripened red and yellow bell peppers.  They were at peak ripeness and loaded with flavor.  For the heat we selected jalapeños, poblanos, and banana peppers.(a gift from my friend Mary’s garden!).  None of these is fiery hot like the Scotch Bonnets and Habanero’s used in the video, but, this would have all the heat we wanted.

The remaining ingredients are cilantro, limes, garlic and salt. 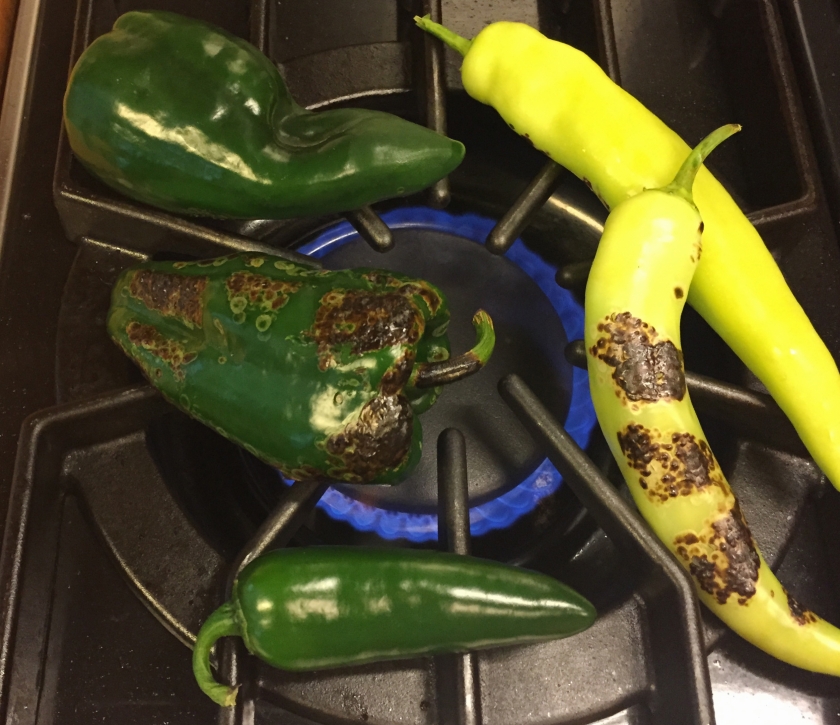 We decided that roasting a portion of the chills would provide a greater depth of flavor so while Andrew was removing the seeds and chopping the peppers, I roasted a couple of each of the chills, directly on the gas burner.

Once they were nicely charred all over, I put them in a bowl and sealed it to let them steam for 5 or 10 minutes.  Then we peeled away and discarded the charred skin and added the peppers to the sauce.

Once all the ingredients had been coarsely chopped, we combined them in batches in the food processor.  Each batch had about 2/3 sweet peppers, 1/3 chilies, the juice and zest of one lime, one clove of garlic, a large handful of cilantro, and about a teaspoon of kosher salt.

This left a final batch of just sweet peppers which we used to regulate the overall level of heat by diluting it down to our tastes.

Earlier in the summer we tried the recipe as directed using vinegar, but we found that flavor dominated and obscured the flavor of the peppers.  This time we used lime juice and lime zest which gave the sauce a fresh bright note. 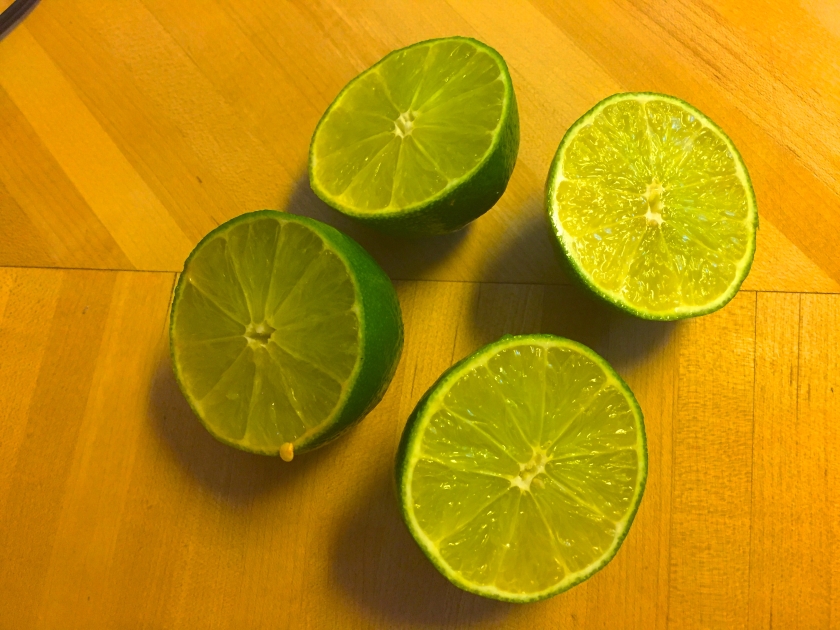 Working in batches we pureéd the peppers with the other ingredients using just enough lime juice to keep the overall mixture liquify.  As they break down, the peppers themselves yield a lot of liquid so this required only about one lime per batch.

We did a lot of tasting along the way and our mouths were burning!  Greek yogurt would be our “palate cleanser”. 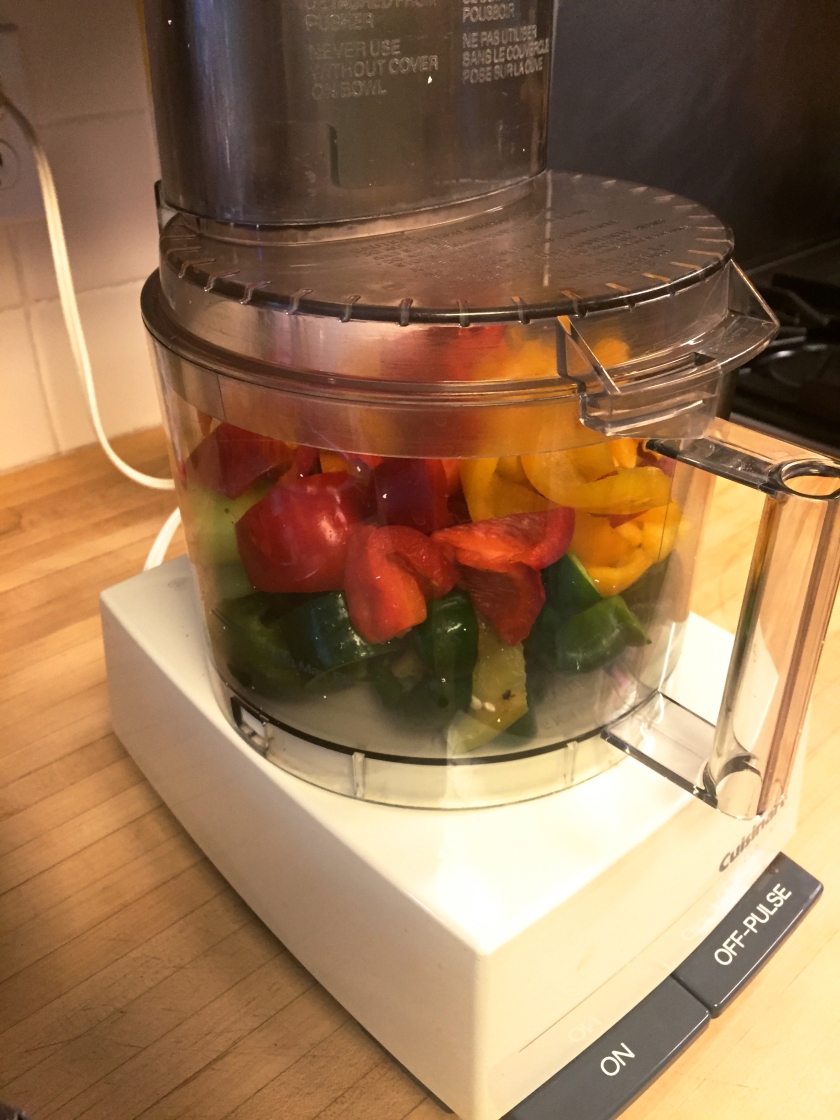 The batch of peppers in the picture at the top yielded about a half gallon of sauce.  It went into the refrigerator and will now develop flavors over the next 2-3 weeks.  It is the consistency of a liquidy paste, like pesto and that will preserve it longer.  In the end we held out some of the sweet puree mix as a way to adjust the heat.  Heat and spiciness is a very subjective thing but for our palates, Andrew and I found the results of this batch to be perfect heat, and loaded with flavor!

Where do you fall on the heat scale?  Do you eat habañero peppers like candy?  Do you smother food with Sriracha?  What other ingredients or preparations would you add to this recipe to adjust it to your own tastes?  Andrew and I are thinking of perfecting our own recipe and bottling it as Christmas presents this year so look for your “ToneMan & Son” Pepper Sauce around the holidays!

Thank you to Chris de la Rosa and CaribbeanPot for a great recipe and the baseline for our own mid-Atlantic version! 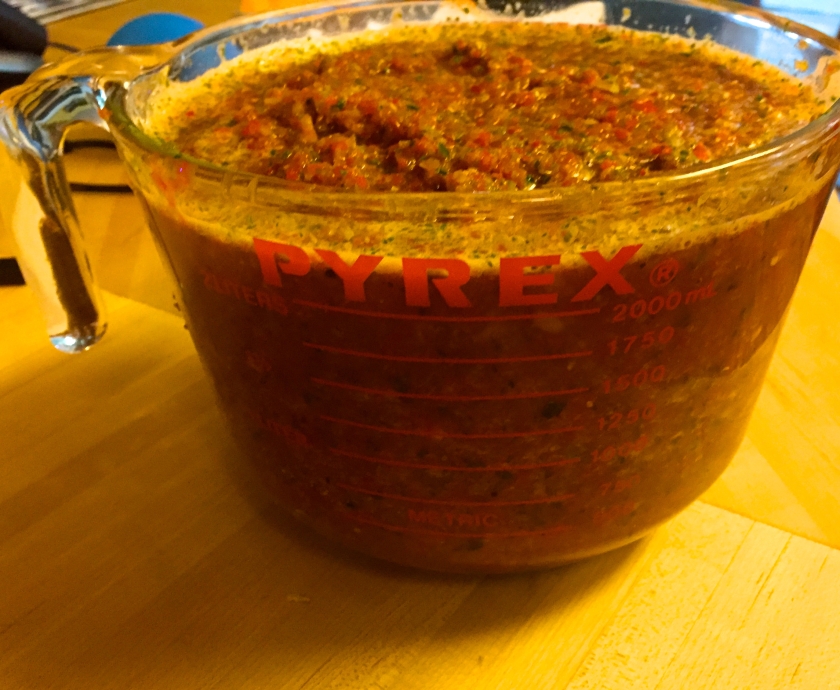