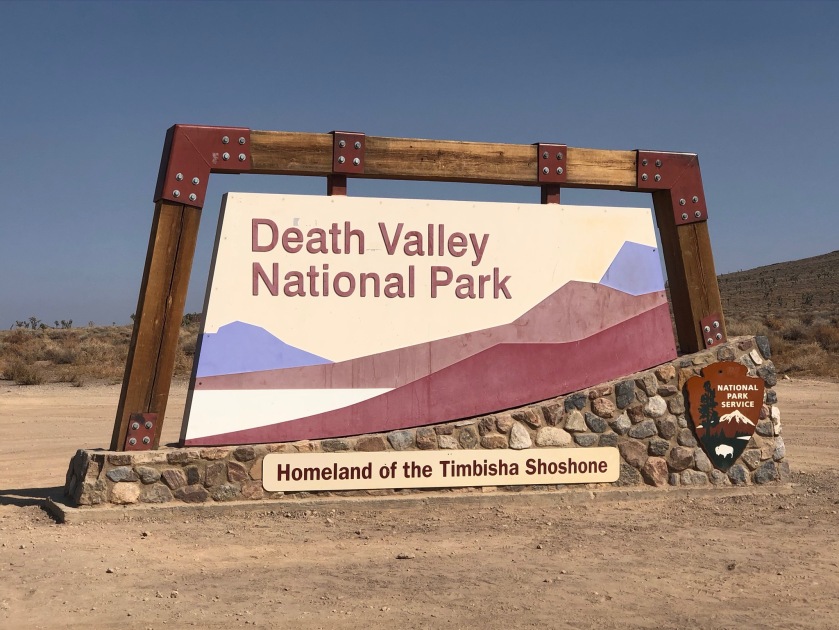 This morning we woke up in Bridgeport, CA and it was 33 degrees out. Temperatures would go up to the 90’s, and by evening we were dining lakeside in a balmy 85 degrees.

The drive may turn out to be the most beautiful day of the trip. I’ve been drinking Sierra Nevada beer for many years and now here we were, in the Sierra Nevadas! It was a spectacular drive of colors, textures, planes and contours, so pleasing to the eye we couldn’t stop taking pictures!

We stopped in Lee Vining, CA at the Latte Da Cafe. It was just one of those places that was comfortable, authentic, and popular. We grabbed a couple chairs, well-spaced and in the sun and enjoyed breakfast sandwiches on homemade focaccia. I got an Americano and a great sandwich.

By early afternoon we were entering Death Valley National Park with its other-worldy landscape. we saw Rainbow Canyon known as “Star Wars” Canyon because of the US Air Force fighter pilot training maneuvers right through the canyon. The geological aspects were spectacular with layers of colors and textures. I was reminded of Simon Winchester’s The Map that Changed the World. I was a little disappointed that we didn’t see the searing heat Death Valley is known for. It was a dry 94 degrees and actually pretty pleasant!

We saw rocky cliffs, and soft sand dunes. The “valley” doesn’t come for many miles as you ascend the mountains to 8,000 feet and then descend all the way to SEA LEVEL!!!

We spent over 2 hours crossing the park, photographing, and taking it in. At the end, we were in Nevada. Our first state border! We visited a ghost town called Rhyolite It was not the most exciting place to visit but it was also only 1 mile off the main road.

From there we turned south at Beatty, NV and headed to Vegas! We have both spent plenty of time in Las Vegas and didn’t need a big night out gambling. Plus we wanted a more wholesome setting for GusGus. We opted instead for Lake Las Vegas, about an hour beyond the city in the Henderson suburbs. This is a massive man-made development that appears to be made of money. Due to the impact of the pandemic however, my Marriott points got us into a posh Westin resort for the price of an economy hotel. Once settled we were dining outdoors in 85 degree weather by a small fireplace! We’ve covered 650 of what will be 3,000 miles.

The hours are going by effortlessly and we have talked and laughed constantly. We appear to be settling into a rhythm. In the morning I get up to write a blog post, Tim walks Gus. We alternate driving days and the passenger manages navigation, music selection and roadside research.